Each day began with the same routine: upon rising from bed, he stretched, touched his toes five times, did a quick jog in place, and finished with a growled affirmation that this day, as were all days prior, would be his day.

Why it was his day, or what it was his day for, was never quite clear. Nor did his wife ask him. She decided early in their marriage that it might be best she not know. She also decided to wake up a full hour before he did, which on the whole was quite wise.

This particular morning, however, he did not stretch upon rising from bed, he touched his toes 10 times rather than five, and were his wife still in the room, she would have noted the lack of affirmation that the day was his.

For he did not feel the day was his. Nor did he feel it was not his. He merely felt that the day was.

The second occurred when he walked into the kitchen for a cup of coffee and greeted his wife.

She stared at him for some time before asking, “What are you doing?”

“Drinking my coffee. What does it look like I’m doing?”

He looked at his feet, his hands; he reviewed his overall state of standing. “What are you talking about?”

“Yes, you’re leaning. Why are you leaning?”

“Yes you are. You’re leaning to the left.”

“Yes. Can’t you tell? Why are you leaning to the left?”

“How can a person be leaning to the left and not know it?”

“I’m sure I don’t know, but if you insist on leaning, I wish you’d do it to the right. You know darn good and well we’re Republican.”

She walked over and pushed him gently from his side. She pushed harder. Nothing changed.

“You seriously think I’m leaning? Maybe you’re the one who’s leaning, did you think of that?”

She turned him toward the mirror in the living room.

“Maybe you should see someone.”

The next day at the doctor’s office, they learned that he lost eight pounds since his last check up, his blood pressure was normal, his ears and throat were clear, and overall he was in very good health. When asked why he felt the need to be seen and he pointed out his sudden leaning, the doctor shrugged and said there were worse ways to lean.

With medical issues ruled out and the leaning continuing for three more days, his wife made an appointment for him to see a therapist. “Maybe you experienced a trauma and can’t remember it,” she told him. He rolled his eyes but said nothing.

On the table in the waiting room were issues of National Geographic, Scientific American, Money, and Mother Earth 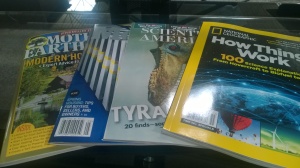 News. She held her breath as he looked over the selections, his hand pausing just a little too long over the last one. Finally he stood up and grabbed a Golf Digest from a nearby chair. His wife exhaled.

“I invited some people over for dinner on Saturday,” she told him as he leafed through the magazine. “I wonder if I should cancel, in case you’re still leaning by then.”

He groaned. “Who is it this time? Not that weird couple again?”

“It’s my parents and Sue from work and a nice couple I met in the grocery store last Friday.”

She was the only person he knew who could start a life-long friendship while picking up milk.

“Well, I don’t care if you cancel, but I don’t see what my leaning has to do with it.”

“You can’t be leaning to the left when Daddy comes over,” she continued. “It will upset him. If he leaned, I’m sure he’d lean to the right.”

“Regardless. You can’t be leaning to the left when he’s eating. It’ll give him indigestion.”

The therapist found his case fascinating. “Have you been traveling recently?” she asked. “Been out of the country?”

“We went to Puerto Vallarta last year,” his wife said. “And two years ago we went to Canada.”

The therapist nodded. “I see, I see,” she muttered.

“Do you think I caught a bug?” he asked.

“Oh, no — nothing like that. How old did you say you were again?”

“Ah yes… yes, that’s about the time it starts.”

“Well, it’s a common phenomenon, albeit not widely discussed. You see, as people get older, they tend to become a little less stringent in their beliefs. They ease up a bit, if you will. International travel facilitates this a great deal, but primarily it comes with age. And it happens both ways. A very liberal person might find themselves growing uneasy with excess government spending, while a very conservative person might start thinking that buying organic isn’t such a bad idea.”

“And that’s why he’s leaning?”

“That’s the interesting part — I’ve not seen it manifest itself so literally before. I’d love to do a case study on you.”

He was not amused. “Listen, are you telling me that because I’ve been to Puerto Vallarta and started buying organic grassfed beef that I’m going to lean left for the rest of my life?”

“Where do you buy your grass-fed beef?” she asked. “Whole Foods charges a fortune.”

“Isn’t there anything we can do for it?” his wife asked.

“Well, I’m not sure you should do anything about it,” the therapist explained. “I realize change is uncomfortable, but becoming more tolerant of other viewpoints is a healthy part of our maturation process. It doesn’t mean you have to change political parties.”

“We’re not talking about how I’ll vote,” he reminded her. “We’re talking about me banging my head on door frames whenever I enter a room. How do I keep from leaning?”

“You haven’t been banging your head as much lately,” his wife added consolingly. “Maybe you’re getting used to it.”

He groaned. “I don’t want to get used to it. I’m getting strange looks at the gym. And yesterday a guy tried to get me to register for the Green Party. The Green Party! He said I looked their type.”

His wife patted his knee. “It’s okay honey. I’d still love you if you belonged to the Green Party.”

“I’m not joining the Green Party!” he exclaimed. “Seriously doctor, isn’t there anything I can do to keep from leaning to the left?”

She rubbed her chin and considered the question. “Well, I don’t have a lot of experience with this, but I believe once the process has begun, there’s very little you can do to prevent yourself from becoming more open-minded.”

“But that doesn’t mean you will lean all your life,” she added quickly. “This could have been the result of your feeling uneasy, or even embarrassed, at your change of views. You can only suppress your true feelings for so long, before they find a way to declare themselves. In your case, it may have been with leaning. Does that sound plausible to you?”

He opened his mouth, closed it, then looked down at the floor. “I didn’t vote Republican in the last election,” he mumbled.

There was an uncomfortable silence. Finally his wife spoke, “During the last pledge drive, I donated to NPR.”

“You mean… you’ve been feeling it too?”

“So how come I’m leaning and you’re not?”

“My mother has been a closet liberal for over 20 years,” his wife explained. “I learned from the best.”

Since our story is a bit crazy, we’ll have a crazy recipe to go with it. This is my family’s favorite chocolate cake. I like it because it’s incredibly easy and only dirties one pan. Husband, Son and Daughter like it because as it’s so easy, I make it often.

You may have seen recipes similar to this one. No eggs, butter, or milk are included, and no, the pan doesn’t need oiled either. See what I mean about it being easy? It’s crazy!

Mix dry ingredients together in a 9×13 inch baking pan. Add wet ingredients and stir with a fork until smooth, being careful to get the edges too. Bake at 350 degrees for 30 to 35 minutes, or until toothpick inserted in center comes out clean.

Frosting: yeah, I don’t really do frosting. I suppose you can frost it if you want, but we like it best as is, served with a bit of ice cream. The most I’ve ever done is sprinkle it with powdered sugar after it has cooled. Trust me, it’s delicious.