I can’t remember if I’ve ever told you where I work? It’s at a large public high school — I’m one of the secretaries. Near my desk, immediately to the side of it, is a little sitting area with a sofa, chair and coffee table.

The woman who had this position before me policed the sitting area with great rigor. Students were never allowed to sit there.

If they did, she’d make snarky comments to them in a sugary sweet voice, along the lines of, “Oh, are you here to see the Principal? Shall I tell him you’re waiting?” And then she’d snicker as they scampered off.

It may not surprise you to learn I’m a wee bit more lenient. But please be aware, my leniency arises not so much from kindness, as apathy. I simply don’t care who sits there. My only rule is that they are quiet.

Lately I’ve come to the realization that in the three years I’ve been here, the sitting area has taken on a certain ambiance — a kind of geeky milieu, if you will.

I told the other secretaries we should start calling it “The Island of Misfit Boys.”

One of the boys, Nate, is our most regular denizen. In fact, he was the 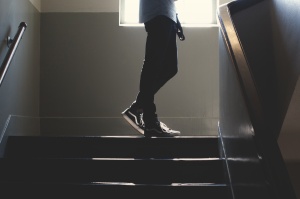 first. He started sitting here occasionally his freshman year, back when he was struggling to adjust to high school. Most of the time he sat there in a dark mood, other times he cried.

A few times he got so upset that I  had to get his counselor, because I don’t do emotions, okay?

His sophomore year was better. He started spending his lunch periods here. Eventually he got brave enough to toss his granola bar wrappers in the garbage can under my desk.

This year, his junior year, he started sitting here before school as well as lunch. He even spoke to me from time to time. He’d say ‘hi.’

I didn’t have a guess.

“I had two finals yesterday and I did really, really well. In English I got a 94 and in Calculus, I guess it was 25 points because it was 25 questions, I don’t know for sure, but I got 21 right, but then she said I got some extra credit too, so I really got 23, so that’s pretty good! I’m so proud of myself!”

That was the most I’d heard out of him in all three years. I congratulated him for his good work. He was about to walk away, then he turned back.

“Do you always sit here?” he asked.

Taken by surprise, I stammered, saying I sometimes manage to leave my desk.

“I don’t mean any offense,” he said in a rush. “I was just wondering if you’re a teacher.” When he heard I wasn’t, he asked, “Then what do you do here?”

I told him I was the principal’s secretary. He stared at the office behind me, as though seeing it for the first time.

“Oh,” he said. “I thought maybe you were a teacher. Have a good Christmas.”

I wished him a good one too.

This just goes to show that Nate is coming out of his shell. It may have taken three years, but even so. It’s happening.

Also, it occurred to me that back when I was in high school, I attracted attention from the same sort of boys. I’m like a magnet for social misfits.

But at least they’re safe on my little island.

9 thoughts on “A Safe Place for Misfits”