Not sure how it happened, but somehow I got on the mailing list for Ted Cruz. A letter 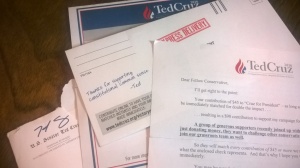 came about a week ago, in an ordinary envelope, addressed to me. In the upper left corner it read:

Normally I toss all political materials in the recycle bin, but this one was mysterious. Why was Ted Cruz writing to me? What personal business (not conducted at taxpayer expense) did he wish to discuss with me?

Hmm. The mystery deepens. Not only is he approaching me on personal business, he considers me one of his ilk. How he got the idea I am of his ilk, I don’t know, but his ilk I am not. To own the truth, I have yet to meet my ilk. I am currently ilk-less.

Interesting point of fact, I am also on Bernie Sanders’ email list. I don’t know how this happened either. Apparently, there are many people confused about my ilk status.

You see, I only declare a party when I absolutely have to, and the only time I have to is for a presidential primary. As soon as the vote is cast, I re-declare my ilk free status. It happens so fast, you don’t even know I’m there.

I was about to toss the Cruz letter in the trash when suddenly it came to me — I know who the letter is for! Ted Cruz doesn’t have personal business with me; it’s Osterhandt Hartwell he wants! Oh wow, that’s such a load off my mind. I mean, it makes perfect sense, and…

Oh wait, that’s right. You don’t know who Osterhandt is, do you? I better fill you in.

When we moved to Phoenix, I called the newspaper for a subscription and talked to a very pleasant woman who took down all my information. Now here’s the thing: normally I only use my full name on important documents. So why I found it necessary to give her my legal first name, Christianna, just to subscribe to the paper, I don’t know.

Ordinarily this causes a flurry of questions — Could you spell that? I’m sorry, did you say i or y? Was that two n’s? And then there’s a comment on the name itself. Were you named after someone? Oh, really, your grandmother? Where was she from? — and so on. Which is why I avoid using the name. The less conversation the better.

But in this case, the woman didn’t ask a single question. She didn’t ask for the spelling or anything. I figured she must have been Norwegian. You just never know.

About two weeks later I received the bill for the newspaper. It was addressed to “Osterhandt Hartwell.”

Okay, so I’ve no idea how Christianna became Osterhandt, but even more interesting, she apparently found Osterhandt a perfectly reasonable name. Nothing to question, no reason to repeat for clarification. As though she encountered the name on a daily basis.

And I absolutely love the inclusion of the d. It gives the name real class, don’t you think?

I realize I could have corrected it, but I liked the name too much. It was cool. And it turned out to be a great way of tracking how I got on various mailing lists.

So you see how easy it was for me to create an image of Osterhandt? Heck, I can see him now, sitting in a fine leather armchair, drinking a whiskey sour. He grumbles a lot about taxes and the intrusion of big government. Also, he’s one heck of a sharp dresser. (Hey, he’s my imaginary persona; I’ll dress him any way I want.)

This is the man Ted Cruz is seeking, don’t you see? It only makes sense. Little does Cruz know, Osterhandt shares his space with my inner environmentalist. In fact, I think he has a bit of a crush on her. We’ll call her Peggy.

Peggy likes to wear long flowing skirts, poet blouses and minimal makeup. She has been my good friend for these many years, dating back to the fourth grade when my family visited Yellowstone. She believes very strongly in private lands conservation, which could be why she’s been flirting with Osterhandt.

Pretty sure Cruz is not trying to contact Peggy. Though it might explain why Sanders has been emailing.

Also found in the inner core of my being is my 50s housewife. Let’s call her Barbara. You know what’s great about Barbara? She’s from a time when women frequently wore gloves. How great is that? Also, she likes to bake pies. She’s not doing it to please anyone. She just likes pie.

It’s possible Cruz is trying to contact Barbara, but what he doesn’t know is that she is an ardent feminist. If anyone should even hint to her that she shouldn’t have full reproductive rights… well, they need to keep in mind that Barbara wears spike heels and knows how to use them.

Sorry Ted. Barbara is not your gal. Still waiting to see if Hillary contacts her.

Is it any wonder I haven’t found my ilk yet? Oh well. At least we have pie.

Pies aren’t hard to make. Truthfully, I think they’re fun, and as they are the BEST DESSERT EVER, any work put into them is worth it. But many people freeze up at the thought of making a crust. So with that in mind, I actually bought pie crust sheets and tested them with this recipe. (The things I do for you.)

Preheat oven to 425 degrees. Roll out one sheet of pastry and line a 9″ pie pan. Roll out the second sheet and set aside.

In a large bowl, stir together the tapioca, sugar and salt. Add the berries and mix well. Pile mixture in pie pan and dot with bits of butter.

At this point you can slap that second crust on top, flute the edges and cut a few vents in the top. But hey, since you saved all that time by using store-bought crust, why not put in a little extra effort and make a lattice top? It’s not hard, looks fantastic, and is great fun. (Barbara would approve.)

To make a lattice top, cut the remaining crust with a pizza cutter or sharp knife into even strips, about 1/2 inch or so wide. Set about four pieces on the center of the pie, next to each other, then fold back every other one. Lay another long piece perpendicular over those, unfold the two over the new one; fold back the other two and lay another strip on top. Keep working in this manner all around the pie, until finished. For more complete instructions and visuals, click here.

Bake for 30 minutes, then reduce the heat to 350 degrees. Continue baking until the juices are bubbling and the crust is golden, about 35 minutes longer. (To keep the edges from getting too brown, make a long strip of aluminum foil and wrap it around the pie.)

*Note: Once again, I forgot to add the butter. Once again, I couldn’t tell. Your call if you want to include it. There’s no law governing it.

14 thoughts on “On the Mysteries of Mailing Lists & Ted Cruz”