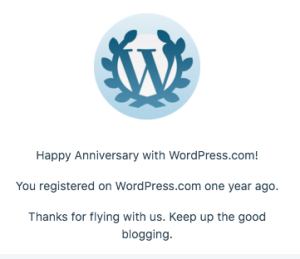 At first I thought it was a WordPress prank. Upon further reflection, I realized it was true: one year ago on April 1st, I started this blog.

As for me, I’m reviewing yet another cookbook in my collection: should it stay or should it go?

Let’s take a look, shall we? 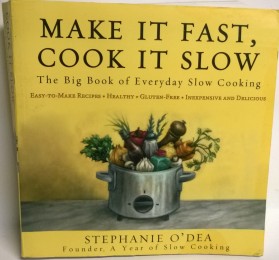 “Make it Fast, Cook it Slow: The Big Book of Everyday Slow Cooking” by Stephanie O’Dea.

Back in 2008, Stephanie began her blog to document her New Year’s resolution: to use her slow cooker every day for a year. This cookbook, and a modestly profitable website, was the result.

Familiar story, right? Let’s see, there’s been:
Buy Nothing Year
Julie and Julia
The Happiness Project
The Yes Man
Year of Living Biblically
And how can we forget Eat, Pray, Love?

Not all of these were blogs of course, but they all came as a result of people committing to something for an entire year. I’m sure we could list many more, but these are the ones I read or followed.

Well, not Eat, Pray, Love. I couldn’t get past the first chapter on that one. Also, not sure I should count Julie and Julia either. I only halfheartedly watched the movie. Loved Julia, didn’t care for Julie. (Apparently Julia wasn’t fond of Julie either, so there ya go.)

But all the others I enjoyed because they were either very funny or very helpful. Often both. The Yes Man — the book, not the movie — I really enjoyed. In between the humor, there’s a great lesson there. One of which is: If you’re intent on saying yes to everything, don’t visit Amsterdam. (On the other hand, it’s not like you’ll remember any of it, so go ahead. Knock yourself out.)

One thing I can’t help thinking though, especially as I read Living Biblically by A.J. Jacobs, what about their family and friends? What about their spouse, live-in partner, significant other?

Seriously, I think I’d like to read a book by A.J. Jacobs’ wife. She must be some sort of saint to put up with her husband living the Bible literally for a whole year.

All this is to say, I’m fairly certain that if I were use my crockpot for an entire year, I’d probably be living alone right now. Either that, or I’d have a mutiny on my hands. (Which might make for an interesting blog, now that I think about it.)

Anyway, back to the cookbook. The thing I like about it is that unlike nearly every other crockpot cookbook I’ve seen, Stephanie O’Dea rarely uses canned soup or convenience products. Also, at the end of nearly every recipe, she includes a “verdict” saying how much her family liked the meal. And they weren’t always in agreement, which is when her humor shines.

Plus, there are several unusual recipes, such as homemade yogurt, pumpkin spice latte, baked brie, cranberry sauce, and falafel, along with the usual stews, casseroles and roasts. Sure, I could probably find most of these recipes online, but there’s something about leafing through a cookbook that makes you more willing to try new things, don’t you think?

I’ve made several recipes in the book, and pretty much liked them all. I made a few notations increasing seasonings, but that’s not unusual for me.

You know where this is headed, don’t you?

Yeah, I’m keeping this cookbook. Let’s face it, a crockpot can be a writer’s best friend. Just toss your ingredients in, let it cook all day, and boom, you got yourself a meal. Despite the fact you spent all day staring at your computer screen, pleading for your muse to end her vacation already.

But enough of that. Let’s eat something.

So here’s a recipe from the book I hadn’t tried before. Not only did it turn out great, it gave me plenty of leftovers for lunch and several comments from coworkers on how good it smelled. Ah, creating envy in the workplace. It’s what we all dream of, am I right?

Jambalaya in the Crockpot

From Make it Fast, Cook it Slow

Using a 6-quart slow cooker, combine the broth, wine and uncooked rice. Add the vegetables, corn, black beans, tomatoes and garlic. Add the sausage. Cook on low for 8 hours or on high for 6 hours. Stir in frozen shrimp, turn the crockpot to high and cook for another 30 minutes. Ladle into bowls and serve with crusty bread.