A couple days ago someone asked me, “How do you sleep at night?” and I responded, “Fine, thanks.”

Only later did it occur to me the woman was probably being snarky. Especially as we were discussing how overly involved some parents were and I said my kids didn’t have that problem, as most of the time they were lucky if I remembered I had kids.

And that was when she asked about my sleep habits. Which upon reflection was a pretty quick change in topic, so yeah… she was probably being snarky.

But since we’re on the subject of sleeping, the other night I had a dream where I traveled to Montana in a hot air balloon because I heard there was a pie shop there beyond good, and you know my views on pie, right?

Anyway, I landed the balloon expertly (of course), walked into the pie shop and who do you think is there but Captain Kangaroo himself!

He walks me over to a table, hands me the menu and says, “Come here often?”
It shocked me so much, I woke up immediately.

And why was this, you ask?

He pronounced the ‘t’ in often! Can you imagine? He said it like this: off-ten.

I admit it’s something I hear from time to time, usually from younger people or non-native speakers, but from the Captain? I don’t think so!

Fact is, I watched Captain Kangaroo for most of my childhood and, dare I say it, my early teens as well. (Okay, fine, my late teens too.) Anyway, I’m fairly certain that if he was a hard ‘t’ speaker, I’d remember it.

Which makes me think my dream Captain is suffering from a case of Linguistic Insecurity. Sort of like I did when I heard a woman say balsamic vinegar, only she didn’t say it like I did, stressing the second syllable: bal-SAM-ic. Instead, she stressed the first: BALL-samic.

And I thought to myself, “Oh, so that’s how you pronounce it!” Because up ’til then, I had never heard it spoken. So from then on I said BALL-samic. Until I went to an Italian restaurant and ordered salad with BALL-samic dressing and the waiter said, “You mean bal-SAM-ic?” and I said, “uh… yeah.”

That’s what Linguistic Insecurity does to us, people. It shames us in front of snooty waiters.

But back to the Captain. I’m thinking something similar must have happened to him. There he was, going about his life, chatting with Mr. Green Jeans, joking it up with Mr. Moose, and everyone dropped their t’s as off-un as they pleased.

Then one day the Captain encountered a man in a Montana pie shop who said, “Excuse me, Captain. By any chance does this establishment serve Chocolate Rum?” and the Captain says, “Why, yes! Yes we do!” and the Rummy says, “Well, I’ll buy a whole pie, then! One doesn’t get Chocolate Rum often!”

And the Captain walked away thinking to himself, “He pronounced the ‘t’ in often! Have I been saying it wrong all these years?” So from then on, Dream Captain began saying off-ten, right along with the Rummy.

Would I have stayed in the dream pie establishment longer, I might have learned if he decided to pronounce every ‘t’ in speech as a safeguard. As in:

Hark, now listen as I hasten to fasten the door left open too often, ’til the tables glisten and the ice cream softens, and yet will I whistle from now until Christmas.

Did you catch every ‘t’?
Read it again, this time out loud. I’ll wait…

This is what our poor Dream Captain is going through, people. Sad, isn’t it?

Now if you’re a person who regularly pronounces their t’s with abandon, please, don’t let anything I’ve written make you feel the slightest bit bad about it. I’m certain the letter T appreciates you, and far be it from me to make any member of our alphabet unhappy.

And for those of you who spent the better part of this post mentally going over your speech habits, wondering if in fact you pronounce the ‘t’ in often — relax. It’s not unheard of, and may in fact be hustling to wrestle the lead, as it appears to have several apostles, however much the rest of us may bristle as we listen.

This is a very decadent, dark chocolate pie, and honestly not that hard to make. A real winner for the holidays! To make it even easier, you can use store bought crust, but taking the extra step of making a crumb crust makes for an impressive pie. There’s not much rum in this, but keep in mind the alcohol doesn’t cook out. If you’d rather skip it, simply add an extra 1/2 teaspoon vanilla extract. 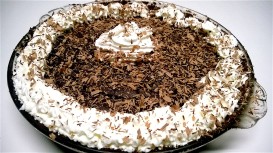 Use a food processor or rolling pin to grind cookies and walnuts into very fine crumbs. Add the remaining ingredients, mix well, and press into a 9″ pie plate. Bake in 375° oven for 8 minutes. Let cool as you make the filling. (My crust shrank a bit during baking, so I used the back of a spoon to press it back up the sides while it was still warm. Worked like a charm.)

In a medium sauce pan, combine sugar, cornstarch, cocoa and salt. Add eggs and a bit of milk, stir together until a smooth paste is formed. Add the rest of the milk and cream, stir with a whisk until fully incorporated. Add chocolate chips and cook over medium heat, stirring constantly until the chocolate melts and the mixture comes to a boil. Continue cooking (and stirring) for two minutes. Remove from heat, add rum and vanilla, stir well. Pour into pie shell and refrigerate at least three hours.

Top with whipped cream and garnish with shaved chocolate or dust with cocoa. Eat often, for maximum pleasure.

23 thoughts on “Dreaming of Captain Kangaroo and Chocolate Rum Pie”