I never wanted to be a teacher.

But standing in front of a classroom for nine months out of the year? No thank you.

Nevertheless, for 40 minutes last week, I was in charge of a high school World History class. Here’s how it happened…

If a teacher is absent and no substitute picks up the job, other teachers have to give up their planning period to cover the class. For obvious reasons, no one is happy with the situation.

By contract, full-time teachers in our district have to do these ‘internals’ five times. Past that, they can either decline them or agree to do them for pay ($27 a pop). Most are eager to get them out of the way and start earning extra money. But there are others who evade them, and some are quite sneaky about it.

Such as last Friday, when one of our English teachers had to to cover a history class.

Our principal needed to ask her something, so she sent me to the room. I used my keys to enter, the classroom was dark as they were watching a film. The students were very quiet.

I approached the teacher and asked the question. She stood up and said, “I’ll go tell her. Can you stay here? It’ll only take a minute.”

This struck me as odd. The question wasn’t of a private nature, and I’m a reliable middle person. On the other hand, the kids are quiet, the movie is on history, I was a history major…

I sat down. Have you ever sat behind a teacher’s desk? Oh, the power!

Mr. Hawes is a clever man. From where I sit at the back of the room, I can see every students’ move and they have no idea I’m watching them. Unless they turn around, and I would see them turn around.

The teacher leaves and it takes me a split second to realize: she took all her stuff with her. The question should take two, three minutes top to answer. Why did she take her purse, notebook and diet coke with her?

The movie is something you might find on the History Channel, but in its early years when they still dealt with history. It’s on the Roman Empire and the Punic Wars. Been several years since I was in a history class, and I had little interest in ancient stuff. Even so… the Punic Wars. Something there intrigued me. What was it again?

A student approaches the desk. “Can I use the bathroom?” he asks.

Holy cow, I control whether students can use the bathroom or not! My God, the power!

“Yeah, sure,” I say. He grabs the bathroom pass and leaves. I wonder, should I have gotten his name? I’m not sure what the protocol is.

Hannibal! Hannibal crossing the Alps! That’s what I liked about the Punic Wars!

Huh. He used 37 elephants. Did you know that? I mean, I knew he had elephants, I just didn’t know he had 37 of them. Interesting, don’t you think?

There are 27 students in this class, all sophomores. On the whiteboard at the side of the room, I read the plans for the week:

So in one week, they cover four countries, three rulers, and sign contracts. Plus they bring in tissues, don’t forget that.

I read the notes Mr. Hawes left for his sub (who didn’t come): “All of the classes are watching a movie today on Russia. All you have to do is put the CD in and click ‘Russia.’ If you have trouble in first period, Ian can help you.”

Below Mr. Hawe’s notes, the Chemistry teacher who filled in first period wrote, “Your sub was sick. The video on Russia didn’t fill the whole period. They had 27 minutes to do whatever.”

Do you get the feeling she was pissed?

Underneath that was a note from the teacher who abandoned me: “Mr. Honkamp helped me play ‘Engineering an Empire.’ I have no idea what you mean by Russia?”

The woman is either dumb, or she found a video that played longer than the one on Russia so is just playing dumb. I pray it’s the latter.

Oh wow, they had to cross a river! I totally forgot that part! So they built these rafts nearly 120 feet by 50 feet, ’cause you know, you gotta fit the elephants.

Elephants on rafts! The audacity! Meanwhile the Gauls are on the other side watching.
(Oh, the tension!) 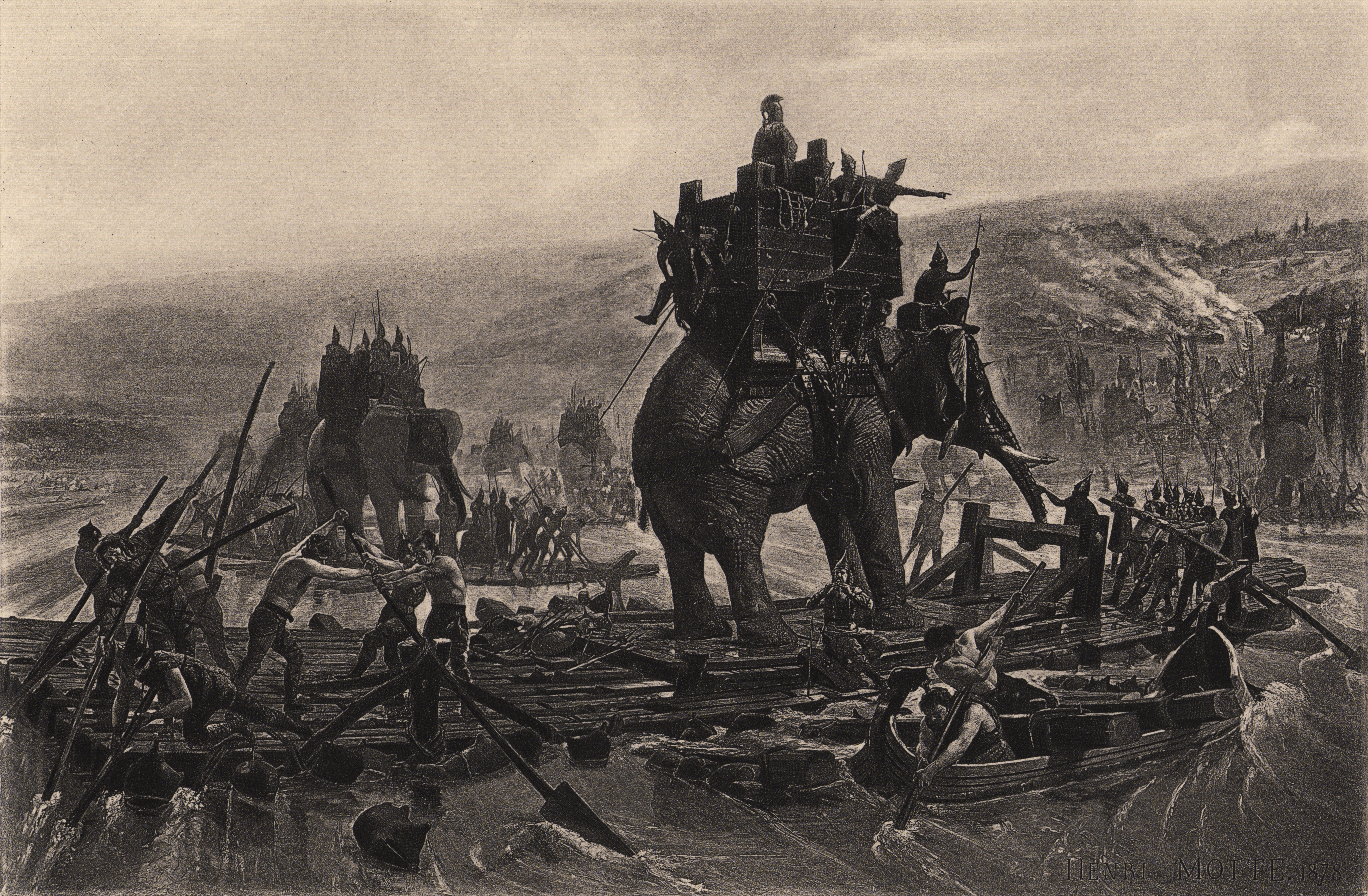 Seven students are napping, six are on their phones, eight are conversing quietly. Two girls are playing hairdresser. The one did her hair in two french braids, the other is trying to do hers the same way but is having trouble with the part.

From where I sit, I can see her third attempt is way off. Should I tell her?

Okay, so the Gauls totally freaked and basically ran off without much of a fight. Honestly, who can blame them? I mean, elephants crossing a river? That’s madness! Plus, the Carthaginians were banging their shields and yelling, making a terrible racket. Must have been intimidating.

Bathroom Boy returns. In total, four kids wind up using the restroom during the period. Yet again I’m reminded what a different school this is than the ones I attended. From sixth grade on, I never used a school bathroom. (UTIs be damned, we’re talking personal safety here.)

The girl with the crooked part gives up and moves in front of the first girl, who starts braiding her hair.

I didn’t know Hannibal was exiled, did you? True, it was a ‘voluntary’ exile, but one presumes his other choices weren’t much better. Also, I didn’t realize Hannibal committed suicide, did you? He did it after he was betrayed to the Romans. Fascinating.

The film ends. All 27 students turn and look at me.

I look at the clock – three minutes to the bell – I smile and shrug. They turn back. Several conversations start at once. None of them about Hannibal, Rome, or the use of elephants in battle.

The second girl’s hair is done. The part is perfect.

The digital clock shows time for dismissal and the students start walking to the door. I say, “Pretty sure we have to wait for the bell.” All of them stop.

Everyone remains where they are, conversations resume. The seconds tick by.

Geez, how out of sync are these clocks?!

At last the bell rings. They head out the door. No one says a word to me, I say nothing to them. My stint as High School Teacher is finished.

My duty completed, the battle is done. No need for voluntary exile here.

I tell the other secretaries my tale. They are all suitably shocked.
The receptionist gives me this:

Only four more and I start getting paid!

I think I’ll pass. Unless they’re watching a movie on the Middle Ages. That’d be cool.