Not sure about you, but I’ve been in a bit of a funk lately. Not quite feeling the lighthearted folly I try to bring to you every Wednesday, if you catch my meaning.

I was about to give it up for lost and take the week off, certain you’d understand, being the understanding sort of readers you are. Then yesterday evening, while going through a box of old photos, I found a little Valentine’s Day card dated 1924: 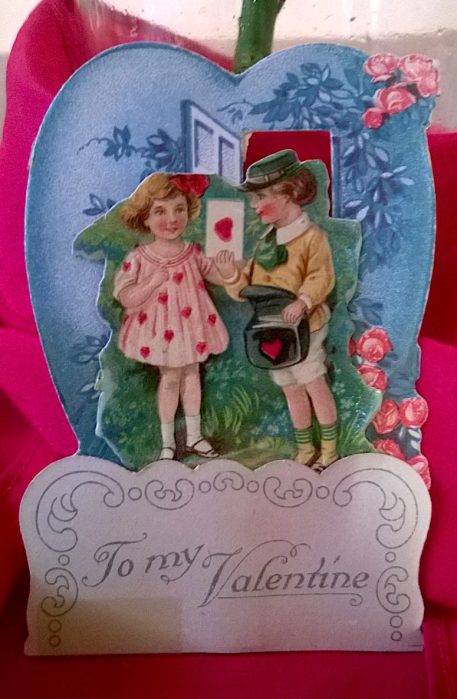 It’s a card my dad received when he was a baby, and he passed it on to my son on his first Valentine’s day in 1994.

A sweet little card, don’t you think? From a sweeter, simpler time. Back when people were kinder, time moved more slowly, and there wasn’t as much anger, hatred and prejudice.

Not content with just assuming it was better, I spent some time with Google.

Consider this: The Immigration Act of 1924,

Here’s the fact I want you to consider: Opposition to this Immigration Act was minimal. As in practically nonexistent.

Compare that to the reaction toward more recent immigration reform and the difference is pretty startling. People were not only opposed, they were positively outraged, and resistance took shape almost immediately.

I believe there’s a reason historians tend to be calm, stoic types. It’s not merely that they’ve seen it all before, but they see we are progressing. However bad things might appear, they’re never as bad as they once were. Society is improving.

I’m not saying we can ignore what’s happening — quite the opposite, actually. What I am saying is that we shouldn’t lose hope.

History is on our side. Love ALWAYS wins.

So keep the faith people, and hug your pet. Best remedy there is when you’re in a funk.

Also, here are two sites I use for keeping up with current events and keeping my funky moods at bay:

PolitiFact — best bipartisan place I’ve found for fact-checking
Daily Skimm — You’ll get a pop-up when you first click the link, but check out their newsletter for a preview of the morning email they send five days a week. They have a charming way of reporting the news with just enough snarky humor to take the edge off.

What sites or publications do you use to stay informed?