The following is a true account of what happens when snot meets technology. Despite our most incredible advances, it is crucial for technology to remain snot-free.

Consider this a Public Service Announcement…

It happened when I was working in Colorado at a small weekly newspaper for cattlemen and ranching. I knew nothing about cattlemen or ranching, but I had a college degree and I minored in Journalism. Apparently that was a first for this small town. They hired me immediately.

Besides myself in the role of assistant editor, there was a graphic designer, a couple ad reps, 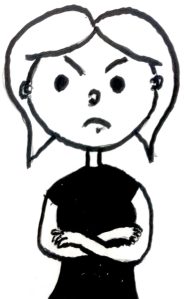 a circulation clerk, a part-time IT guy, and our boss, the Managing Editor from Hell.

If I were to tell you everything about our Managing Editor from Hell (hereafter known as MEH), you would say, “Aw, come on! No boss is that bad!”

To which I would chuckle and say, “Oh, you sweet innocent thing. How I envy you.”

Anyway, on to the snot incident.

It was after lunch. I was working away quietly, doing the whole editing thing. Plugging in ads, cutting articles, destroying journalistic dreams. The usual stuff.

When… Boom! My m, n, and space bar stopped working. Just like that! It was the weirdest thing!

Weirder still, our part-time IT guy was in the office.

Usually he’d pop in at the end of the day, pounce on our computers the moment we left, ‘clean up’ files, delete fonts, level whole cities with a single mouse-click.

Then the next day, when nothing worked as it should, he’d sweep back in and put things aright.

MEH thought he was a genius.

It was really odd he was there in the middle of the day, in the presence of so many witnesses. I hated the idea of calling him over, so first I rebooted, then unplugged the keyboard, plugged it back in… no good.

I explained the issue.

“Did you try rebooting?”

I said I did. He did it anyway.

“Sometimes if you unplug the keyboard…”

I said I did. He did it anyway.

“Hmm. This is a tricky one.” He left for a bit and came back with a another keyboard. Where he got it, I know not.

“You can use this one for now. I’ll take yours apart and see what I can find.”

A half hour elapses.

MEH calls me into her office. She tells me to sit down.

Trevor has my keyboard dismantled on the table in front of him.

“Have you been eating at your desk?” MEH asks. Her tone is accusatory. She has a strict rule against eating or drinking at our desks. No coffee and donuts for us. Not even bread and water.

“Of course not,” I say, watching Trevor as he grabs a box of tissues.

“What about drinks? Have you had any soda at your desk?”

MEH leans across the table and gives me her steeliest glare. “When Trevor opened the keyboard, there was liquid in there. Lots of liquid. I wonder… if you’re not drinking at the desk — which you shouldn’t be — how did it get there? Hmm?”

Trevor pulls out a tissue and starts dabbing between the keys.

The tissue jogs my memory. Right before lunch, I experienced the most sudden, most explosive of sneezes…

It was one of those volcanic sneezes that just blasts with no warning, you know? Spewing forth nasal discharge at incredible speed, with a volume of mucus far greater than your delicate little nose should be capable of holding.

We’re talking a sneeze of tremendous snot magnitude. The kind that takes several tissues to mop up. Though of course, it’s easy to miss a puddle or two.

“I haven’t the slightest idea how it got there,” I tell MEH.

Trevor picks up the keyboard and sniffs. “There’s no smell to it. Is it water?”

“Can’t imagine how this happened,” I say.

Trevor turns the board over and taps, a small river pours onto the table. “Whatever it is, there’s a lot of it.”

(Well, it was a helluva sneeze.)

Trevor sighs. “I’ll do what I can, but no promises. We’ll probably wind up replacing it.”

MEH glares at me.

I return to my desk with repeated orders of no food or drink. I swore I would continue to follow them, just as always.

No promises on sneezing, though. Some things you can’t control.