This coming Saturday, in the wee hours of morn, I’m boarding a plane for New York City.

Hold onto your hats: Husband is singing at Carnegie Hall!

To answer the probing questions you haven’t asked yet, it all started about a year ago…

For context, you need to know that Husband and Son are part of a local group called ProMusica. Son sings in the choir; Husband usually plays in the orchestra, but if they need singers more than trumpets, he’ll do that instead.

About a year ago, he emailed me at work:

Husband: Remember that concert we did last fall? The one with the bluegrass bit? Last night at rehearsal they said the composer will be presenting it at Carnegie and they’re inviting choirs to participate. We’re one of them. Does that sound like something we’d want to do?

Husband: We’ll have to talk to the kids, as they’d miss classes. It’s in April, right after Easter. And it’ll cost money. Probably a lot.

Husband: It’s only the choir, not the orchestra. I’m not sure if we’d both want to sing or just one of us.

Husband: We can go over the money part at home. We’ll have to talk to Son and see what he wants to do.

Son had too many obligations that interfered with rehearsals, so Husband will be our sole family performer at Carnegie. (OMG!) And yes, it’s a pricey trip, mainly because we’re turning it into a six-day family vacation. Because, hey, since we’re already there, why not?

We’ve been saving all year, and I’m telling you, there’s nothing like the excitement of a big trip to motivate saving. New York became our mantra:

“We should get new chairs for the table. These are shot.”
“I’d rather have New York.”

“The dishwasher’s not worth fixing. We’ll have to get a new one.”
“I’d rather have New York.”

Yes, we’ve been hand washing dishes for about six months now. Surprisingly, it hasn’t been a problem. I use the time to meditate on New York.

Anyway, all this is to say, I’ll be gone next week. I plan on rerunning one or two posts so you won’t forget me. And I’ll try to keep up on reading blogs, but no promises, okay? 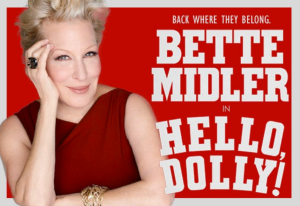 You’ll hear plenty about the trip the week following, you can count on that.

In the meantime, here’s a sneak preview: We have tickets to see Bette Midler in Hello Dolly!