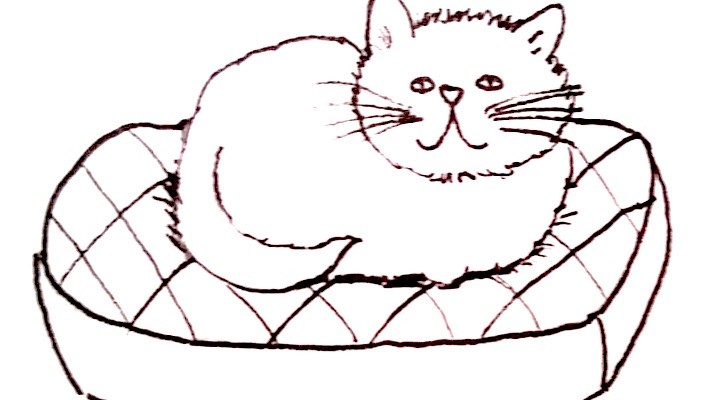 I was thinking about Beauty the other day — that’s Beauty with a capital B — when that Byron piece popped into my head:

She walks in beauty, like the night
Of cloudless climes and starry skies;
And all that’s best of dark and bright
Meet in her aspect and her eyes

Actually, those exact words didn’t pop into my head. It was more like,

She walks in beauty like the… um… night
Something, something… yada, yada…
How’s that go again?

So I Googled it and got the exact wording (see above, top).

Word on the street is that Lord Byron penned these words after seeing his cousin in her mourning dress. Even if black was her color, we can assume the dress wasn’t the reason for his rapture. (Though with Byron, anything goes.)

And on that cheek, and o’er that brow,
So soft, so calm, yet eloquent,
The smiles that win, the tints that glow,
But tell of days in goodness spent,
A mind at peace with all below,
A heart whose love is innocent!

There was a woman I knew from my younger days, way back when, who I think illustrates Byron’s point to some extent. She went to our church.

Usually children never take much notice of older people unless they impact our lives in some way. Such as a neighbor lady who bakes cookies, or a friend’s mother who will back the cost of the ice cream man.

Children are selfish beasts that way.

Be that as it may, this particular woman I noticed. My mother was talking to her and as I stood to the side waiting — I never participated in any conversation willingly — I was struck by her brightly colored dress. Church ladies in those days typically chose subdued prints, such as a demure pastel floral. But this woman was wearing magenta.

Secondly, and more importantly, I noticed how happy the woman appeared. Most of the women of my acquaintance, the best you could hope for was that they were mildly pleasant. More often they were… shall we say, a little on edge. So much so that an empty juice glass set next to the sink, rather than in the sink, could send them off the deep end.

Yet this woman was smiling and cheerful and looked for all the world as though life was a wondrous thing to be savored and enjoyed. She was positively radiant.

Later I asked my mother who she was and was shocked to learn she had attended our church for several years. This was news to me. How was it I never noticed her before? Or her radiance?

“Oh, she didn’t use to be this way,” my mother replied.

I asked her what changed.

And so you see? Lord Byron was right. Grief is a beautiful thing.

Continuing on our theme of Beauty, I met a pair of pigeons the other day.

They were enjoying a quiet respite in the grocery store parking lot, where someone had very thoughtfully dropped a milkshake and half-eaten container of french fries. The couple was partaking of the bounty.

As I passed, the male regarded me in that peculiar pigeon way they have, where they study your face very carefully and store the knowledge, as it may come in handy later.

He was a pretty boy and so I told him. I said, “Aren’t you a pretty boy.” Not as a question, you see, but as a declaration. For indeed, he was pretty. The top of his head was a shimmery purple and his breast had specks of green and black, with just a dash of gray. Truly, he was a pigeon among pigeons.

He showed no sign of false modesty after hearing my compliment. Birds never do. They don’t look down at their feathers as though to say, “Oh, these old things?” They simply accept your words as a matter of course.

Then I noticed his companion and frankly, I was shocked. With her scruffy grayish-brown feathers and dull aspect, she looked the bird equivalent of a woman in an oversized t-shirt and sweatpants.

And not a flattering oversized t-shirt and sweatpants, neither.

You would think that such a noble bird as he was, she would make more of an effort, wouldn’t you? But no, not her. She squatted in the midst of milkshake froth, a limp french fry dangling from her mouth. 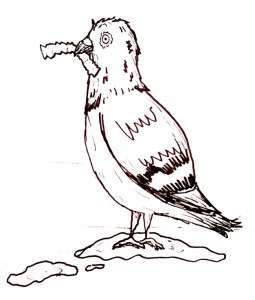 Honestly. I was embarrassed for her.

And yet — and yet, people — it did nothing to diminish his admiration of her in any way. And that is the main thing.

For Love is a Beautiful thing. And blind. Terribly blind.

So if you’ve been paying attention, Beauty is both Sad and Lovely.

Missy, for that was her name, the name of the Persian cat, was a gloriously beautiful, white cat.

Missy shared her home with a Cockapoo named Bubbles.

Yes, you read that right: Bubbles.

Bubbles was an embarrassment to the entire canine community. I knew it, Missy knew it, Bubbles knew it.

Bubbles was afraid of everything. The sound of the furnace kicking on sent her cowering to the corner. A sheet of paper flying off a table made her jump. The dog was a walking bundle of nerves.

So it probably didn’t help matters that Missy’s favorite form of entertainment was to sit on one side of a doorway and wait patiently, oh-so-patiently, until Bubbles entered the room. And then, floomph! Missy sprang out and Bubbles yelped, taking off in three different directions all at once, usually urinating in the process.

Meanwhile, Missy ambled away as though nothing happened, returning to her cushioned throne, where she would groom herself. 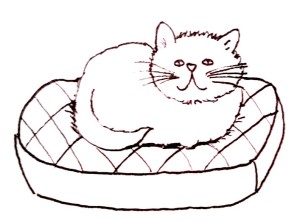 For Beauty is Cruel.

Beauty is Sad and Lovely and Cruel.

And thus ends my treatise on Beauty for today.

31 thoughts on “Thoughts on Beauty, Pigeons, and Persian Cats”