Until I hit the photo albums and, like a damned fool, I open one…

This is a picture of my dad with two Army buddies. Written on the back: 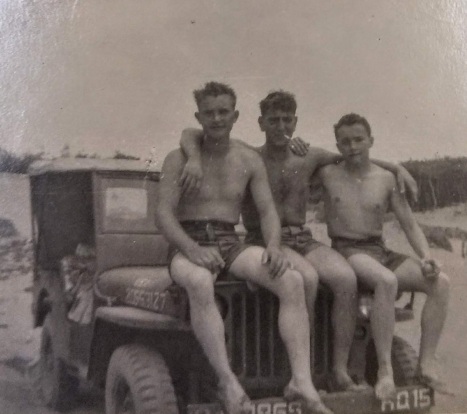 My dad is the one on the left, but the other two? No idea.

As many stories as he told us about his childhood and family history, of his Army days he spoke very little.

I should have posted these on Memorial Day.

Moving on, here’s a photo of me as a baby, making five generations of my mom’s family: 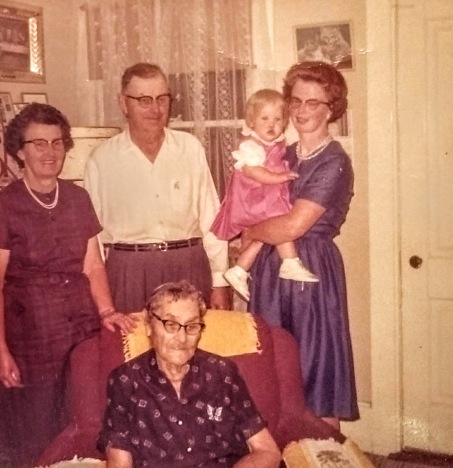 On the far left is my grandmother, next to her is her father, and seated is his mother, my great-great-grandmother, Kate Goodroad.

There are three things I want to point out about this photo:

Several months after that photo was taken, my family moved to sunny Phoenix, Arizona, where we had a dog named Foxy.

Here’s a picture of Foxy in his doghouse: 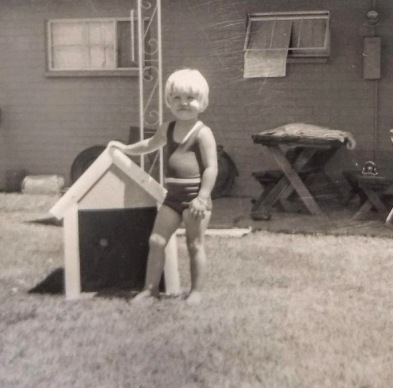 I should point out that Foxy was black, so all you can see is his tongue.

Also in Phoenix, we had an above-ground pool:

I sure seem happy, don’t I?

And look at my brother Dean, standing behind me. He kind of looks like he’s planning something.

What happened next, Dean?! Huh? WHAT HAPPENED NEXT?!

Oh, look! We have pictures from Husband’s childhood, too!

Here’s Husband with his trumpet, looking oh so cool and jazzy:

Do you think they planned this photo, or was it just happy coincidence the shadow landed as it did?

Also, I feel it should be pointed out, had Husband put more effort into his playing? Let’s say, practiced day and night? This would have made a mighty fine album cover.

Even so, I’m happy to report he played in his high school band.

Lucky for you, he gave me permission to post his band picture. His exact words: “Oh, I don’t care.”

I’m going back to my packing now. Wish me luck.

29 thoughts on “Packing for the Move, Making Progress…”