Merricat knows how to open cabinets.

She’s quite good at it. She paws at the bottom corner, careful not to scratch the finish (she’s very considerate that way). As soon as the door opens just a bit, she sticks her paw in and pulls.

It’s marvelous really, how clever she is.

But her real talent – the one I’ve yet to capture on video – is how she opens kitchen drawers.

Now I confess, for the first few weeks we lived in this house I had no idea it was the cat opening the drawers. I thought it was Husband, who for some reason – looking for a screwdriver in the utensil drawer, perhaps? – would open two or three drawers in his quest and then leave. Not closing said drawers. Every day, multiple times a day.

I meant to ask him why. “What are you looking for?” I’d say. “Shall I show you how they close?”

Then one day I walked into the room and saw Merricat in action, exonerating Husband.

You see, what she does is stand or, depending on the height, leap up and land her front paws on the upper part of the drawer. At the same time she pushes her back paws against the cabinet below, creating a momentum that – along with the smooth working mechanism of the hardware – slides the drawer open. With Merricat swinging along.

I marvel at my cat’s ingenuity. Truly, she is a marvel.

She is also a superior bug and vermin hunter. So when she began showing an inordinate amount of interest in one particular drawer, when she continually crawled behind it and made rustling, scratching sounds, I confess, my courage failed me. While I was curious as to what was happening in the deepest bowels of my kitchen cabinets, I decided I wasn’t curious enough.

Then our belongings finally caught up with us. I was laying Contact paper on the shelves and drawers; Merricat came to help, as she so often does. When I pulled out that drawer, she leaped in, crawled behind it, and turned to me with her big green eyes.

Gathering up my strength – and finding my flashlight – I pulled the drawer all the way out and looked where Merricat was sitting. On top of a pile of papers.
Old newspaper clippings, note cards, appliance manuals, an opened economy sized pack of batteries, and a cassette tape of Andrew Lloyd Webber’s greatest hits.

The expiration date on the batteries was 2005. Most of the newspaper clippings were earlier than that.

The part that thrilled me most? All of the newspaper clippings and note cards were recipes.

We’ve learned a few things about the owner while living here. Her son told us she’d been widowed for over 40 years, raised her three children by herself, and in her last few years, in declining health, spent nearly every day in her sun room.

From the number of built-in bookshelves, we can assume she enjoyed reading. Safe to say she was a fan of show tunes, possibly theater in general. She was organized enough to keep appliance manuals, but wasn’t always able to find them.

She had a habit of losing batteries. (I can see her now: “I know I bought batteries — where on earth could they be?”)

Also, she was a school secretary. (Those of you who have been following along know that was my previous job.)

And if all that wasn’t enough, we now learn she collected recipes and put them in this drawer. The drawer Merricat found so interesting.

Thank you, Merricat. The pooping incident has been forgiven.

I’m sure you’re wondering what sort of recipes they are, right? After careful study and reflection, I would say they all lean heavily toward “what-should-I-bring-to-this-week’s-potluck” fare.

Which shouldn’t surprise any of us, right?

Oddly enough — or perhaps not, given your understanding of Minnesota culture — there’s a potluck at my church this Sunday.

Say, how about you help me decide? There are two here that look promising. 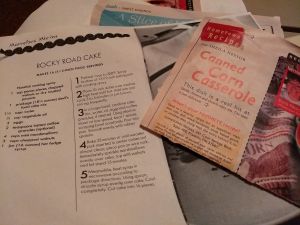 One is a Canned Corn Casserole, which normally I wouldn’t find interesting but it has an option of using fresh corn instead of canned. I’m not sure if the local farmer’s market will have corn yet, but it’s possible.

The other possibility is Rocky Road Cake. To its credit, it’s a chocolate cake with marshmallows, nuts and chocolate fudge sauce. The downside is that it uses a cake mix and normally I never buy those because I’m a food snob. And yet! The recipe has this intriguing notion of using coffee rather than water when blending it. Doesn’t that sound fascinating?

In any case, we have these two contenders for my first Minnesota potluck. Shall I make a side dish or a dessert?

Choose your selection carefully. My future as a Minnesotan may depend upon it.

Okay, not really. But please help me out anyway. I’m terribly indecisive about these things, and for some reason Merricat is showing little interest in the whole affair.

32 thoughts on “My Clever Cat Earns Her Keep”