A few days ago, at the park near our house, I stopped and sat on a bench.

I point this out because it is highly irregular for me. I wasn’t tired, I had no book with me, no tablet in which to write, ergo, no reason to stop.

Only there was a bench, the bench was near the river, and so one stops. 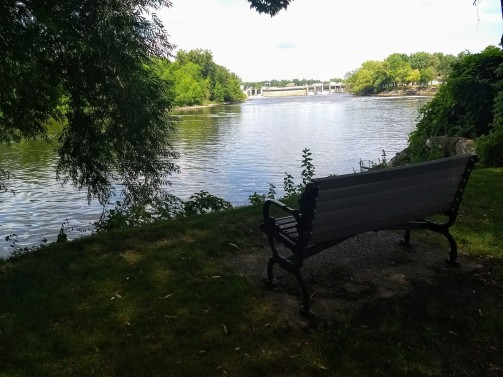 I sat there for… well, I’m not sure how long I sat there. You lose a sense of time while staring at a river. It may have been hours, it may have days. In any case, after a time my attention was drawn away by a man standing at the boat landing a short distance from me.

He had sighed. A clearly audible, contented sigh.

He saw me and smiled. “My God, this is beautiful,” he said, by way of explanation. I agreed. He asked me how long the path continued along the river; I admitted I didn’t know.

“It wraps around the bank over there,” I indicated toward the left. “Then it curves around a really pretty swampy area.”

I sometimes forget not everyone finds swamps pretty.

“Oh, very nice! I’ll have to check that out,” he said, my fellow swamp appreciator.

“Isn’t it funny,” he continued after a moment, “how it’s not until you’re old that you find serenity?”

“Yeah,” I said, though I thought it an odd thing to say. He wasn’t that old. I mean, he couldn’t be much older than me and … oh.

Now that I’m home again, I’ve been thinking about this discussion with the old swamp man. What he said about serenity, old age, and what-not.

I wonder, is it serenity we are finding in our golden years, or is it just a sense of oh-well-good-enough?

Or — hold on to your hats now — could it be they are the same thing?

Sounds good, yeah? But it’s not a state we can reside in for any lengthy period of time, and I propose we shouldn’t even try. Sure, pay a visit on occasion, appreciate what you have, yada-yada. Consider your place under the stars, only don’t stop reaching for the stars.

To butcher Browning: “Our reach should exceed our grasp, or what’s a heaven for, so get off your bum and do something already.”

I took another personality test recently (trust me, this relates somehow), though I honestly don’t know why I take these blame things. They all lead to the same conclusion, that being I’d either make a great scientist or a serial killer.

This particular personality test, the Enneagram Type Test, I’d heard of it before and been meaning to do further study on it. Then I visited the site of one Sarah Bessey, a progressive feminist writer/preacher, and there on her sidebar (when you’re a blogger, you pay particular attention to sidebars) she proclaims she’s an “Enneagram 9.” Leading me to look up the description of Enneagram 9s and finding out, among other things, they are progressive feminist writers and preachers.

Long story short, I took the test — always on the lookout for new items to add the old sidebar — and found out I’m a 5. Or in true Enneagram verbage, a 5w6.

If this means something to you, I salute you. I had to look it up.

Besides making one damn fine scientist and/or serial killer, the description said that a 5w6’s life, “is characterized by a deep sense of longing.”

Come now, I thought. Isn’t that true for everyone?

We may not long for the same things — for some it might be a sense of meaning in their life, for another wealth and success, or we might simply yearn for the perfect chocolate fudge brownie.

The point is, we all have longings. And I find it unlikely they disappear with the advancement of age. Or rather, they don’t disappear, but change.

The longing for wealth may change with a realization there are different methods for measuring wealth. A longing for meaning might soften into an understanding that you had more control over it than you ever realized. And a longing for the perfect brownie recipe may end with a humble acceptance that several store-bought mixes are quite good.

So yes, to some extent we may find a sense of peace and serenity in our life. A sense that, “oh hey, maybe I don’t have to beat myself up quite so much.” But I don’t think it’s a given.

All this is to say, the achievement of serenity is not an end to itself, or even an end. Without a sense of striving in your life, a continual grasping for something better and wiser just out of reach, than how can one truly be content? It’s the striving that makes it so!

Or at least I think that’s the case. I’ll have to get back to you on that.

Another couple years by the river should do it.

30 thoughts on “On Serenity, Striving, and Shall We Gather at the River”