What with one thing and another, mostly another, I found I was without a blog post for today.

I mean, sure, I wrote things. A feeble response to an online article I read, the beginnings of a short story that went nowhere, and a silly thing about the Biblical character Job calling Heaven’s customer complaint line. Funny, but too long for a blog post and I wasn’t sure how well people knew the story of Job.

Anyway, rather than skipping this week and ruining my record of posting in a timely manner two weeks in a row, I’m going to toss out some random thoughts that were cluttering up my brain.

There was a squashed snake on the side of the road the other day. I saw it while walking to the post office. It was a pretty one, slender and long with bright yellow stripes. No idea what kind it was, but it looked like it nearly made it across the street before it was squashed. Poor guy.

I need to buy a rake. It’s not for leaves, though we know they’re coming. It’s for all the acorns. Our yard is full of them. So many that when you walk in the backyard, you don’t walk so much as roll. And I think the squirrels here are lazy. They don’t seem to be working very hard at storing food for winter. (Maybe they know something?) 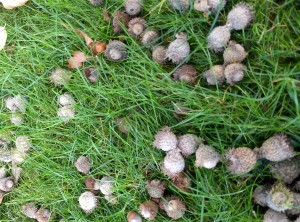 So this is how it is. You write something funny about the Book of Job and think, gosh this is great. This is worthy of publishing. And so you check the submission guidelines for humor sites and magazines. That’s when you discover there just isn’t the market for snarky humor pieces about the Book of Job like there used to be.

I need more boots. I only have two, both black, one short and one tall. These were the ones I thought worthy enough to pack and able to withstand Minnesota weather. I’m thinking I need multiple types. Money is no object! (Who needs food?)

Back to the squashed snake. Why was he crossing the street? The side he left was woodsy and green. The side he was heading toward was rocky. Had he been satisfied where he was, he might still be alive today. What possessed him to leave his happy home? Was he unfulfilled as a snake? Was the weight of his responsibilities too much to bear? (*Gasp!* Did he, like our squirrels, foresee the future and found no reason to carry on?!)

Maybe what I should is bundle together my Bible stories in text, Samson’s online dating snafu, and the piece on Job — add a few more texts and alternate stories — then self-publish the whole lot of them.
Hmm. It might work. I’ll have to think about it.

If the squirrels and snake are onto something, if we have but a limited time on this earth — okay, I guess we always knew our time was limited, but let’s say it’s more limited than we thought — does that change anything? Does it change how we live, how we act, or how soon we snatch up boots on sale?
Or work on the book we have percolating in our head?
Hmm.
Excuse me. I should get back to work.

37 thoughts on “Thoughts on Squashed Snakes, Self-Publishing, and the End of the World as We Know It”