For those of you who landed here in the hope of finding a recipe for bread pudding with bourbon sauce, let not your heart be troubled. For indeed, there is one.

And since I know how irritating it is to have to scroll through an entire blog post when all you want is the freakin’ recipe–seriously, do we need a picture for every time they crack an egg?–I made you a jump link straight to it: Click to jump to recipe

(Gosh, it’s been so long since I did a jump link, sure hope I did it right. If not, I wonder where they all went to?)

Oh well. On my nativity set. Here’s a picture of it: 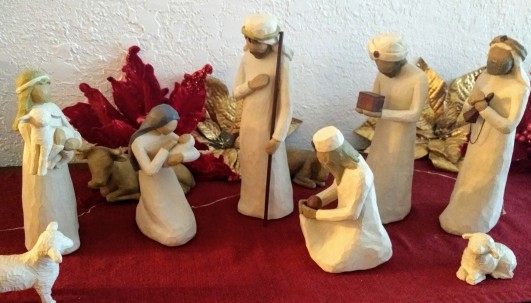 The set is from the Willow Creek collection and is ridiculously popular, but for the record, I bought it when it first came out. Before it was popular. Just so you know.

It’s the first nativity set I ever bought and the only reason I did so is that Mary is holding the baby.

Most sets have her praying, like she wishes he’d go to sleep already…

Other times she looks surprised there’s a baby at all, which I guess is reasonable given the circumstances…

Once I saw a set where Mary was holding up a cloth. I told Husband, “Look! She’s got a diaper!” He thought it was the swaddling cloth. Sadly, I never saw the set again.

Anyway, the reason I’m musing on nativity sets, other than it being Christmas and all, is that it recently came to my attention it was St. Francis who came up with the idea.

(For those of you who follow this blog and don’t just come here hoping to snag a recipe, you’ll know I recently started working at a Franciscan convent. Hence, my recently acquired knowledge of nativity sets.)

It was St Francis who created the first living nativity. He set it up in a cave in central Italy and it was so popular that for several years after it was reenacted throughout Italy. Eventually they created small replicas for people to keep in their homes.

His intent, St. Francis’ that is, was to have a scene where people could reflect on the event; no one cared if it was historically accurate or not.

Even so, for a lot of us, it became gospel truth. The stable, the wooden manger filled with straw, the shepherds and wise men jockeying for space, the stingy innkeeper, the whole shtick.

Several years ago I saw a video of a theologian talking about the nativity story. It was quite entertaining, mostly because he talked with so much enthusiasm.

According to this theologian — his name was Dr. Bailey — it’s far more likely Jesus was born in a home, not a stable. The homes of that time and region consisted of one big room, a portion of which was lower and that’s where the animals were kept at night. Mainly to protect them from thieves, but also because they added warmth to the house.

As for the manger, it was probably a concave spot cut into the main floor for feeding the animals on the lower level. When the angels told the shepherds, “You will find the babe wrapped in bands of cloth, lying in a manger,” they would have pictured a home just like one they grew up in. The message was clear: “He’s one of us!”

There’s a lot more Dr. Bailey said, including specifics as to why they’d be in a house. If you’d like to read an article he wrote, you can do so here.

What I love about this rendition is that it becomes a tale of hospitality and family. A new baby lain not on scratchy straw but in a cozy nook, a young couple assisted by relatives they probably never met before, the nervous new mother comforted by wise and knowing women. And however poor the family, they would have shared their food as well.

It could be that this is where our present day Christmas gets it right. Families and friends getting together, sharing food and conversation, a extra room if needed.

And here’s where we segue into the bread pudding with bourbon sauce, because if you’re going to be hospitable toward your family, a little bourbon can’t hurt.

And if my jump-link worked, we’re now joined with our recipe hunters too.

Oh, hey there! Nice to see you again!

This is a tasty, grown-up version of bread pudding, with cranberries because I’m not fond of raisins. But feel free to use whatever dried fruit you’d like. Also, if you’d rather not have bourbon in it, use apple cider instead.

First off, put the dried cranberries (or dried fruit of choice) in a bowl and soak in bourbon (or liquid of choice). Let soak for a good 2 hours.

Preheat oven to 350 degrees. Pour half-n-half (or milk) in a mixing bowl and add the bread cubes. Stir gently until all the liquid is absorbed. In a separate bowl, whisk together the eggs, sugar, vanilla and spices. Strain the dried cranberries, reserving 1/4 cup liquid for the sauce. Pour the egg mixture over the bread cubes and add the cranberries, stir gently until combined.

Grease an 8×8-inch pan with the melted butter. Pour the bread and egg mixture into the baking pan; bake at 350°F for 35 minutes or until the liquid has set.

To make bourbon sauce: Melt the butter in a saucepan over low heat; stir in sugar and egg and whisk until smooth. Slowly cook over low heat, stirring constantly, until it thickens a little. Remove from heat and stir in bourbon. (Note: the alcohol does not cook out.)

Pour the bourbon sauce over the bread pudding to serve. Enjoy!