I’m taking a lesson from my wise friend Andrew and decided not to wait for something clever to pop into my head before I wrote a blog post.

(The advantage of this is that if you don’t like the result, blame Andrew.)

It’s 25° as I’m writing this and we haven’t seen temps on this side of 0 for some time. Lord knows when we will again, so I should be outside. Only my jacket is in the dryer right now, so there you go.

This is what happens when you buy a white coat — this is my smaller coat, not the huge quilt I showed you in my previous post. This one is more like a ski jacket, very lightweight but waterproof and windproof and surprisingly warm. It’s also white, because I have a thing for white coats.

That reminds me. There was a new alto in choir last Wednesday. She just moved into the area and was telling me how hard it was to find a house to buy. They looked at seven in their price range and one was really, really nice, but it had white carpeting in the dining room. So they went with a different house that wasn’t as nice, but at least it didn’t have white carpeting.

This led to a discussion among the altos and a couple second sopranos as to what sort of person chooses white carpeting for a dining room. The general consensus was that it was a childless couple with no pets. “And they only drink white wine,” I added.

Though really, it goes without saying. Only Pinot Grigio goes with white carpeting.

I used to have a white couch. It was a beautiful couch. I loved it very much. Then we sat on it. It wasn’t white anymore. But man, for those first 15 minutes? It was gorgeous.

One of the second sopranos said people who choose white decor are delusional. “Do they think it’s going to stay that way? They’re insane!”

I disagreed with her, but I kept it to myself. You just never know with second sopranos. They look harmless enough, but they can be feisty.

I think white decor enthusiasts know exactly what they’re doing. They know it will show dirt. It’s kinda the point. They want to know when it’s dirty so they can clean it. Such is their dedication to cleanliness.

And I am right there with them, too. Boy howdy. Totally with them. If I lived all alone, that is. And didn’t live in a slushy area. And have a black cat. Or drink red wine.

What I should do is grab my coat and take her outside, but, you know, it’s in the dryer. And my other coat is way too warm for 25°.

The annoying thing is that the whole time Dog is outside, and I’m meaning the whole time, Merricat, who is not allowed outside, meows. On and on and on, she meows. And she doesn’t stop until Dog comes back inside. 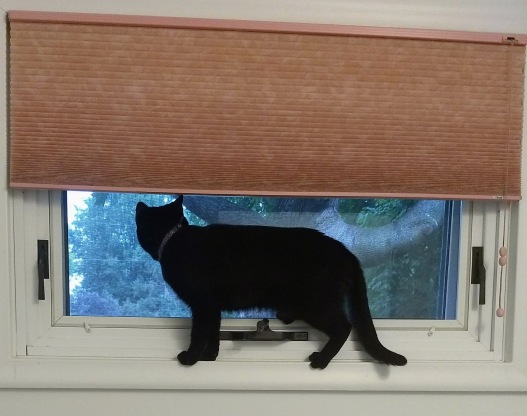 Oh dang, I just missed Dog at the front door. When I got to the door she had already turned around and was walking away.

She’s pretty much deaf now, so the only way I can get her attention is by throwing something at her.

Snowballs work, but I’ve got lousy aim. So now I have to wait until she’s facing me again. While Merricat sings the song of her people.

Don’t you wonder about dogs when they go deaf? I mean, they don’t know they’re deaf right? So they’re probably wondering why we’re not talking to them anymore.

Or maybe they feel bad for us. “Oh, my poor human. Her mouth is moving but no sound is coming out. I wonder if she knows?” 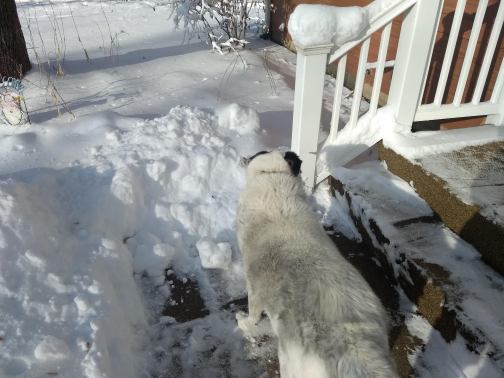 You know what I think my problem is? (I’m off the topic of deaf dogs now, she’s back inside.) This is regarding coming up with ideas on what to write.

I think it has to do with my title, Feeding on Folly. It’s hemmed me in. Fact is, I’m not seeing a whole lot of folly nowadays.

But now, working at a convent? There’s a woeful lack of folly. It’s weird, but of all people who probably have a right to take themselves seriously, nuns don’t.

By the way, did you know they’re not technically nuns? Technically speaking, nuns live in a cloistered community. If they work outside the convent as teachers or nurses or whatever, they are sisters. All nuns are sisters, but not all sisters are nuns.

Not that it matters much. One of the sisters told me most Catholics don’t know the difference either, so they don’t worry about it. If people call them nuns, they just roll with it.

Anyway, what was I talking about? Oh yeah, a lack of folly. What to do, what to do…

You know, this is about the time we should start questioning Andrew’s wisdom, but maybe he was on to something. (We probably shouldn’t tell him that, though. He’s a nice guy and we don’t want him to get a big head.)

Oh hey, my coat is dry and oooh, it’s so white and clean! Guess I’ll be taking Dog for a walk after all.

Okay, so that’s it for this post. Stay tuned til next week when we’ll be talking about nuns… I mean, sisters… or my folly-filled memories, or whatever the hell I want.

55 thoughts on “On white decor, deaf dogs, and a folly-challenged blog”