Note: I’m currently working on the post regarding the Worm and the Water Cooler (which must sound strange if you don’t follow this blog – for context, see this post). In any case, I was nearly done when I realized it required another illustration. It takes me a good, oh, I don’t know… day or two just to draw a face. So the chances of posting this week were looking pretty slim.
I decided to pull one from the vaults. This is a post from June 3, 2015 — my first year blogging. In fact, this was my 10th post and I think I had all of 10 followers. (Pretty sure they were all family.) It includes a recipe because I did that back then. Hope you enjoy it.

My Glorious Summer of ’76

Growing up in the 70s was great. I’m not even talking about the movies and music from that era, though we had some fine ones, have to admit.

What I’m talking about is the total lack of parental supervision. Even if a parent stayed home, they pretty much left us to our own devices.

Brother and I had it even better, as our older siblings had already moved out. Meaning total lack of supervision, baby!

Frankly, it’s a wonder we didn’t burn the whole place down.

We came close, though…

It was the Summer of ’76. I was a sweet, young adolescent, Brother a worldly teenager. He was also our resident Program Director, coming up with all kinds of creative ideas to occupy our time.

One summer he had the brilliant notion of building a mini-thoroughfare in our backyard, using scraps of lumber from Dad’s workshop. Neighbor kids came over with their bikes and scooters and tricycles, zooming around our intersections. Oh sure, there were accidents, wrecked bikes, minor concussions. But it was fun. Great fun.

But it had nothing on the idea he had in ’76. I still remember him coming to my room on a late June day, that familiar sparkle in his eyes that told me our boredom would soon be ending.

His plan was simple. We would solve the Don Bolles murder case.

What? You don’t know about the Don Bolles murder?! It was in all the papers!

Well, some of them.

Don Bolles was an investigative reporter for the Arizona Republic. On June 2, 1976, while following a lead on a story, he was the victim of a car bombing. Word got around the mafia was involved.

The Mafia! In Phoenix!

Brother’s plan was that we would solve the crime by a reenactment. Because that’s how they do it on television.

We learned everything by television. It was Bugs Bunny who taught us that a line of gun powder leading to a larger pile of gun powder would cause an explosion.

Fortunately, Older Brother did some hunting — I think he bagged a bunny — and left some stuff at home when he moved out. It was while digging through it that Brother found a nice stash of gun powder. Hence, his glorious plan was hatched.

Brother had a snap together model car we could use. It wasn’t a Datsun like the car Don Bolles drove, but it would do. What he wanted to know was if I have a small doll I wouldn’t mind blowing up.

I didn’t have to think twice. Kimberly was the one. 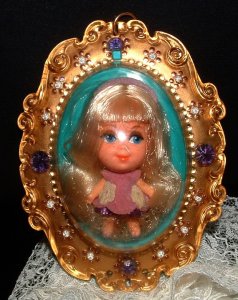 Kimberly was one of those little dolls that came in a pendant necklace. I think they were called Liddle Kiddles. I had several and of them all, Kimberly was the most stuck up.

Even the way she insisted on being called Kimberly. What a snob.

None of my dolls liked her.

We had an area in the back yard perfect for a small car bombing. Brother positioned the car in the parking lot we drew on the concrete and carefully led a small line of gun powder to the doomed vehicle, leaving a larger pile under the car.

I walked Kimberly, intrepid investigative reporter, to the car. Brother took the top off the car (minor revision from the facts, as our car doors did not open), and I plopped her into the seat. We stood at a safe distance away, about three feet, and Brother lit the end of the gunpowder.

It worked! A line of gunpowder burns, just like Wile E Coyote, Yosemite Sam, et al.,  showed us. It ended with a little poof under the car.

The next time we put more under the car. And then more. And juuuust a bit more… and then more.

The next day required more. And yes, more.

The car came apart so many times, we used rubber bands to keep it together. Kimberly’s hair was singed.

We decided to use more.

I’m sure we all have moments in our lives that stand out as particularly memorable. Maybe for you, it’s the day your parents took the whole family to the circus. Or maybe it was when they brought home your new baby brother. Or maybe it was the time you got what you really wanted for Christmas.

For me, it was The Great Backyard Explosion of 1976.

I can still see my brother stamping out the flames, the black smoke rising after the small fire was extinguished. He looked at me and said, “Maybe that was too much.”

We are a family of few words.

Now that, my friends, was a glorious summer. We never did solve the case. Frankly, I think we forgot there was a case. But man, we did have fun.

On a side note, Kimberly was a changed doll after her complete loss of hair. More humble, less stand-offish. The other dolls and I found her much more agreeable. And we had to give her credit for being so brave. It was inspiring.

It was requested by one of my lovely readers that I offer some healthy recipes, as the last few have been wrecking her diet. I’ll do my best, but when you’re stuck in a nostalgic mode, it’s kind of hard to think about salads and smoothies. 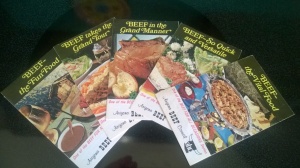 But hey, look at what I found! These are little recipe pamphlets that were freebies from the Arizona Beef Council in the 70s. No kidding!

They’re filled with beef recipes (duh), most of them main dishes, but there are a few appetizers as well. In fact, there’s something called “Liver Sausage Surprises”, because this was a time period when we thought naming a recipe “Surprise” was a good idea. Besides the liver sausage, it includes pickled onions, olives, peanuts and pretzels. No, I’ve never had it, but it definitely sounds like a surprise.

The recipe I’m sharing with you is one we enjoyed as a family and which we firmly believed was refined and elegant. Which should tell you a lot about my family. I’m tweaking it just a bit to make it more healthy; feel free to make it as fatty or lean as you like.

This makes a large amount, but can be halved easily. I think families were bigger in the 70s. Either that, or the beef council really wanted to sell beef.

Preheat oven to 375 degrees. Combine ground beef with onion, 1 tablespoon flour, salt, pepper and ketchup. Shape into about 36 balls. Place meatballs on a foil lined baking sheet, set in oven and bake for 20 minutes, until cooked through.

While meatballs are baking, make sauce: In a large fry pan over medium heat, add 1/4 cup beef broth and sliced mushrooms. Simmer until mushrooms are soft, stirring gently, about five minutes. Pour remaining broth into a small bowl, whisk in the other tablespoon flour, Worcestershire sauce and mustard. Add to mushrooms and stir, cooking until slightly thickened. Remove from heat. Gradually add sour cream (and yogurt, if using), stirring to blend.

Once meatballs are done, add them to the mushroom sauce and return to heat. Stir until heated through. When done, sprinkle with chopped parsley. (That’s what makes it elegant.)

Serve with noodles or rice. And a big salad to keep things healthy!