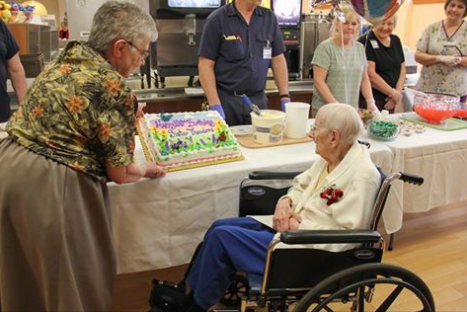 A couple of weeks ago I attended a birthday party for one of the sisters at the convent. She’s 100 years old.

There were balloons, flowers, two sheet cakes and plenty of ice cream.

Lots of people came. All the sisters, of course, as well as others who knew her and even a few – like me – who never met her before.

I’m sure she didn’t care.

It’s unlikely she has any memory of the event and given her blank stare, it was unlikely she had any awareness of what was happening. But she enjoyed her cake and ice cream. That’s the main thing.

I sat at a table with three other employees. One of them has been working at the convent for 40 years(!) and she was the only one among us who really knew Sister Theodora. She told us a few stories.

Sister Theodora was a very kind person who loved talking to people. She was trained as a nurse, spent her early years caring for children but found her true calling when she was moved to elderly care.

Several times this employee would look over at Sister Theodora and say, “It’s so sad… it’s just so sad…” and the others nodded in agreement.

I’m probably alone in this, but I didn’t see what was so sad.

She lived a rewarding life, enjoyed her work, she made it to 100 and now she’s eating cake and ice cream. Okay, so maybe she doesn’t have memories of her past or knowledge of who she was as a person, but does she need them?

As if our lives have worth only when we are of sound mind and body. As if that is what makes us who we truly are.

All right, I’m going to drift off into a bit of God talk right now, so if you aren’t into that sort of thing, just scroll down to the next heading.

Look, I’ll even give you a warning:

As I said before, one of my job requirements at the convent was to “be knowledgeable of Franciscan spirituality or willing to learn.”

I’ve been learning. One thing I learned is that Franciscans are real big on Humility and Contemplation.

(Notice the capital letters? That means they’re big on them.)

The key requirement for each is a self-emptying. Letting go of all those things you think make you who you are — your ego, your ambition, your work, your desires — and opening yourself up to fully experience God. They call this giving up your False Self in order to find your True Self.

Another thing they’re big on is that this is a continual process. They call it Continual Conversion.

(Not only do they like capitals, they’re fond of alliteration.)

It’s ongoing. We can never fully achieve it during our lifetime, but there is joy in the trying so we keep at it.

I want you to know these aren’t wholly new concepts for me. Protestants also speak of emptying ones self, but we tend to breeze over it because it makes us uncomfortable. It smacks of obedience and frankly, we’re not real big on obedience.

Even so, I’ve been giving it a go and so far my progress has been… um… maybe “progress” isn’t the right word. Let’s go with “inching forward at a snail’s pace.” Yeah. That sounds about right.

Emptying myself by inching forward at a snail’s pace is going fabulous. Absolutely fabulous.

Okay, let’s breeze over that for the time being. What I really wanted to say was that the morning after Sister Theodora’s birthday party, this popped up on the app I’m using for centering prayer. It’s by St. Ignatius – the founder of the Order of Jesuits. That guy.

Take, Lord, and receive all my liberty,
my memory, my understanding,
and my entire will,
All I have and call my own.

You have given all to me.
To you, Lord, I return it.

Everything is yours; do with it what you will.
Give me only your love and your grace,
that is enough for me.

Take note of that second line: “my memory.” Even that. Are we willing to give up that?

Fact is, we may not have a choice. We can (and should) take care of our bodies, eat well, exercise, yada-yada. But even then, our genes or our environment or whatever will have the last say. We entered this world not knowing anything, we may very well exit it not knowing anything either. One way or the other, we are emptied.

But to empty oneself willingly, that’s what old man Ignatius was talking about. Remember the chief goal: we are emptied in order to be filled.

The more I think about it, the more I believe we should consider this phase Sister Theodora has entered not as sad, but as sacred. She will soon achieve her True Self and return to God. She has entered a time of Holy Returning.

Does this sound foolish? If so, I’ll gladly play the fool. 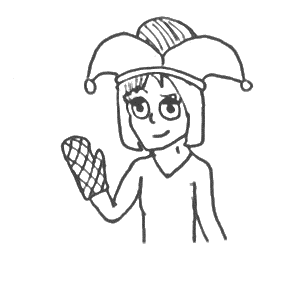 Sister Theodora didn’t stay long at the party. They say she’s not fond of big crowds so once she ate her cake and ice cream, her nurse took her back to the second floor — the Memory Care Unit, where her and five other sisters live.

They receive excellent care there, as do all the sisters who need medical attention. One time at lunch, a sister who recently moved back to the convent admitted she felt a little guilty by how nice she had it. “So many people don’t have what they need, and here I am living in comfort.”

Sitting at the table was one of my bosses — I have two and they’re a married couple, so we’ll call him Mr. Boss.

Anyway, Mr. Boss said to her, “The way I think of ‘privilege,’ it’s not that we should take away the things that bring us comfort, but that we should make sure everyone else is raised up so they receive them too.”

I rather like how he put that, don’t you? And you know, from what I learned about Sister Theodora, I’m pretty sure she’d like that too.