At my old job, if a cockroach was spotted in the front office or hallway, I was the one who dealt with it. It wasn’t in my job description but beings how I didn’t run off screaming at the sight of them, it fell to me.

I will now pause to discuss the two types of cockroaches of which I am most familiar. My plan was to add pictures of real live cockroaches, but I feared some of you might run off screaming. Therefore, I shall try my hand at drawing them.

The cockroaches of my youth, the little ones who regularly visited my childhood home, were these guys:

They are commonly called German roaches, though as a rule, cockroaches care little for ethnic labels.

They are about an inch long, have a dusty brown coloring and can be found most anywhere, such as in your kitchen right now.

They are looking for a snack and really wish you hadn’t tossed that rotting fruit as it’s one of their favorites. That was very wasteful of you.

They’d also prefer it if you’d stop cleaning so much. You’re wiping away all the good bits. And not to make too fine a point of it, but you’re cramping their social life. How do you expect them to find their friends if you keep wiping up their poop trails?

The other roach of my childhood was not as frequent a visitor, though he made quite an impression with my family nonetheless. My mom referred to him as a sewer roach, but he’s more commonly called (at least in the U.S.) the American cockroach.

You’ll note I used the same picture, just made it bigger. It’s not just that I’m lazy… okay, yeah, I was being lazy. But really, their bodies aren’t that different. It’s all about size and coloring.

He’s much bigger than his German counterpart and more of a shiny, reddish-brown.

Oh, and here’s an interesting fact: the American cockroach didn’t originate in America. He came from Africa. Wanna guess how he got here?

That’s right! It’s commonly believed they arrived on slave ships. So the next time you see one of these buggers, meditate on that.

The reason my mom called them sewer roaches (many in Phoenix do) is that they often come up through the drains. Plus, they’ve got that shiny thing going on, giving them a lovely sewer aesthetic.

Ah, the memories these fellas conjure up for me. I can still see Brother running out of the bathroom screaming, streaking down the hall because a roach came up the drain as he showered. Or my parents practically tearing apart our T.V. room because they spotted a particularly large one scurrying across the tile. “It’s as big as my foot!” my mom sputtered, somewhat known for exaggeration but in this case, she wasn’t far off.

It was the American cockroach I dealt with at my old job, back when I worked at a high school in Scottsdale, Arizona. Sometimes we’d find them in the hallways, but more often they hung out where we did, in the offices and our break room. One of the offices was very close to both the break room and janitor’s closet. Meaning it saw a lot of cockroach action. Sadly, the secretary who used this office really really really hated cockroaches.

She and I, we became friends. All she had to do was come to my desk and give me that look.

I’d ask her where it was; she’d give me its last known whereabouts. I’d open my cabinet and withdraw my tools: a plastic cup and a stiff piece of paper. After locating the little fella – who was rarely little – I’d slip the cup over him and slide the paper underneath.

Once he was safely ensconced within his plastic dome, I’d take a walk outside. He and I, we’d make our way across the staff parking lot and over the rocky landscape, out to the tall chain-link fence that held us prisoner. There I would set him free.

You see, I wanted to give the guy some options. He could take his chance crossing the street to enter one of the nice Scottsdale homes on the other side, where they probably served premium cuts of meat and world-class wines. Or he could return to our break room for a stale donut and old coffee.

My method had its detractors.

It is amazing, is it not, how many people are in favor of capital punishment? “There’s a roach in the kitchen! Kill it!”

I never argued with them. Instead I would say, “I don’t like to hear the crunch.” Because, you know, there’s always a crunch.

And besides, I liked getting outside. Dawdling by the mesquite tree, breathing in the city air… ah, the smell of exhaust fumes on a hot afternoon. There’s nothing quite like it.

“They’re just gonna come back!” my detractors would say in a terribly condescending tone. (My detractors were always men.)

The truth is, I kind of knew they were returning. I figured that was why they became so easy to catch. I think they recognized me. 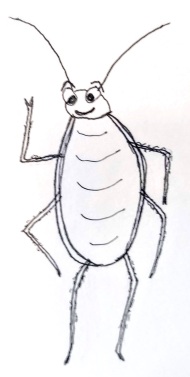 What I didn’t realize was that they were returning for a reason and that reason was not stale donuts.

It happened during my last summer at the school. Our bookstore manager was trying to track down a package and was concerned it had gotten mixed in with some other boxes headed to storage. “I really don’t want to go in that room,” she told me, “but I think I have to.”

“What’s the problem?” I asked.

I’d heard tales of this room but I’d never actually been there. Now was my chance! I quickly offered my assistance. She said yes!

We made our way down the empty hallway. The room was at the end of the Social Studies department, where students learn history, political science, and how we got into this mess.

The bookstore manager got out her keys, unlocked the door and shivered a little. “Are you sure you want to do this?” she asked me.

She opened the door and flipped on the light. I expected to hear scurrying… there was none. We stepped in. No roaches. None!

I was indignant. “I thought you said—“

She turned to face me and her eyes got wide. She pointed behind me. I turned toward the wall…

It was just like the Indiana Jones ride at Disneyland where all those bugs are crawling up the cave wall!

Anyway, here’s the thing: there were no drains in this room! No sink, nothing containing water or food. Nothing! Just boxes and boxes of books and old files. That’s it.

So what were the roaches doing there?

It’s obvious, isn’t it? They’re educating themselves. Reading up, studying our history. No doubt making notes of our failures and weaknesses.

Make no mistake about it, my friends. They will one day rule us all. They were here long before us and they will remain long after. We have to come to terms with this. There’s little sense in fighting it.

And when they finally rise to power, who do you think they spare but the one who showed mercy?

So the next time you smush one under your shoe and hear that crunch, remember there’s another one nearby. They’re always nearby.

They know what you’ve done.

37 thoughts on “All hail Lord Cockroach! (It’s only a matter of time.)”