In our last episode, you learned that I spent the week in Storm Lake, Iowa, attending Synod School with a bunch of Presbyterians. Six hundred and thirty-nine of them, to be exact.

There is much to tell. Oh-so-much. So much that you will be receiving it in doses.

Today’s dose will cover my overall impression of the week, along with the story of my first kiss. (Trust me, in some weird way, they relate.)

The people were charming, the food tantalizing, the information challenging, the activities fun. If I had any complaint, other than the extra-firm dorm bed…

I’d say there was a lack of sufficient free-time to unpack all I was taking in. Keeping in mind I require more mental-unpacking time than your average human.

In hindsight, I could have found more free time. I didn’t have to attend every class — as it was, I skipped one birdwatching class on account of a sore neck. And of course I could have skipped the daily worship services and convocations.

I could have, but I didn’t want to. Their musicians were top-notch and the convocation speaker and worship leaders were some of the best I’ve seen. In particular, the evening worship leader. Her name was Shawna and she pastors a church in Chicago.

Here’s a picture of Shawna — keep in mind it’s with my phone and she moved around a lot:

Not sure if you can tell, but she has some mighty impressive arm tattoos. Also, her hair is rainbow colored.

If you’re thinking she doesn’t look very Presbyterian, you need to broaden your perspective on Presbyterians. Just sayin.

Back to the dorm room – did you happen to notice that plastic-wrapped blue cup on the one desk? They gave us those when we checked in.

It was a quality cup, kept my tea warm, and the color spoke to me. Yet I stopped carrying it on the second day on account of it alerting everyone that we were first-timers. (Sneaky of them, don’t you think?)

Though there was an advantage to carrying that blue cup, as it turned out. When we walked into the dining hall for our first meal – completely overwhelmed by the noise and people (seriously, my first thought when we walked into the cafeteria: “This is my version of hell!”) – a woman waved enthusiastically, beckoning us to her table.

“Do you know her?” I asked Husband. He did not.

Her name was Carol V. and she was making it her mission to help Husband and I feel at home. (Based on the Enneagram class I took, I’d say she was a quintessential 2 — the Helper. But we’re getting ahead of ourselves. More on that later.)

Meeting Carol V. turned out highly fortunate. She gave us plenty of tips for making the most of our week, as well as how to navigate the campus. Her best advice: hit the cafeteria line about 45 minutes after they open. Enough time to miss the families with kids, but before the soft-serve ice cream ran out.

She also encouraged us to not skip the evening activities, and there were plenty of them to be found. Monday night we attended a “Further Conversation with DeeDee” – the convocation speaker. (Husband told me I said something especially profound during the discussion, but I honestly have no memory of it. I think he imagined it.)

On Tuesday we attended “Music with the Stanfield Family,” (most of them musicians from the worship services), where once again we sat next to Carol V.

Carol knew everybody, even the musicians. She wrote down their names for us on a napkin. 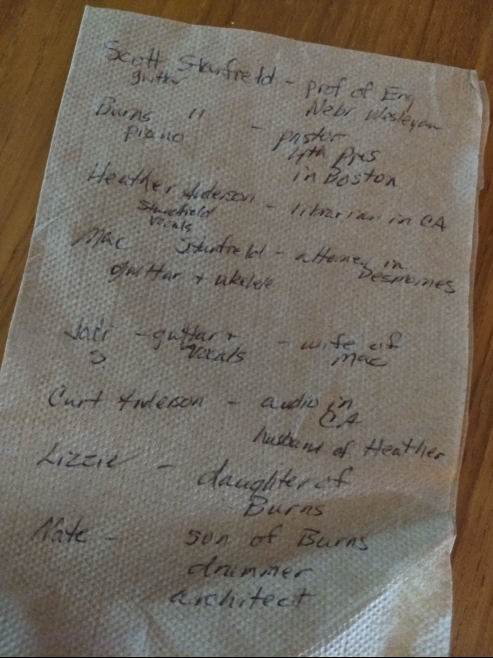 Halfway through the evening, Carol whispered in my ear, “I’m going to invite you to something, but please feel free to say no if it’s not your thing.”

I think it was my “oOoh!” that led her to believe I was open to the idea.

It was happening the next evening, around 8 pm or so. She gave me the instructions: basement level of Smith Hall, enter by the South door. Go down the stairs and the long hallway. The room is through the big metal doors at the end.

“Keep this under wraps,” she added. “It’s not like we’re breaking rules, exactly. We just don’t want to… well… just keep it under wraps.”

The next night was the Synod School dance. We attended for about an hour and I’m proud to say I am now reasonably adequate in doing the box-step. Sometime after 9, we made our way to Smith Hall.

The building was terribly quiet, even down the long hallway. “Are you sure it was tonight?” Husband asked. (Of course I wasn’t sure. I’m never sure.)

We got to the big metal doors and heard some muffled voices on the other side. We knocked – the voices hushed. “This feels weird,” Husband said. I agreed and opened the door.

The room was apparently the college hang-out. A sign above the counter said, “The Underground” and I saw a cappuccino maker and popcorn machine. However our attention was drawn to the 15 or so people seated in a circle on our right, all wearing women’s housecoats. The kind of housecoats your grandmother probably wore. 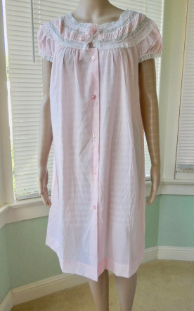 One of the men, a pastor from Wisconsin, said, “Don’t worry, we’re not crazy.”

We were promised the story behind the housecoats, but first we had to select our own to wear. Those were the rules. No housecoat, no wine.

Husband looked slightly terrified, but there was wine at stake. I wasn’t backing down. I selected for him a lovely pink number with small teacups all over. For me, blue satin to bring out my eyes.

As the story goes, two of the women present (and another who passed away, Marjorie) have been attending Synod School since the early 90s. They didn’t know each other at the time, neither did they realize they’d be sleeping in a dorm and using a bathroom down the hall. Without planning, they all wound up at WalMart and bought the same grandma-inspired housecoats. Hilarity ensued. They bonded.

The wine party was Marjorie’s idea. Ever since she passed away, they continued their parties in housecoats. Additional ones purchased for husbands and newcomers.

“To Marjorie!” someone shouted.

“To Marjorie!” the group returned, raising their glasses.

Several toasts later, one of the men brought up that we had missed their opening sharing time. (On account of me being a slow learner on the box-step.) The man was wondering, were we willing to tell our first kiss stories?

Husband said, “You mean I wasn’t your first?”

“We’re gonna assume your mother kissed you first. We’re talking about your first kiss with a boy.”

Another added, “Or girl. We won’t judge.”

“But what kind of kiss?” I insisted. “There are kisses that are forced upon us and kisses we welcome.”

(This is an important distinction, it must be said. The tale of my first kiss belongs less at a wine party than to a #MeToo discussion.)

It was agreed: a welcomed kiss is a much better tale. And so it is.

“This is a bit embarrassing to admit,” I began, “but it was my first year of college.”

“Mine too!” exclaimed Carol V. (We shared a moment.)

“I was at a roller skating rink.” I said.

“But was the kiss French?” a man asked.

The conversation began to drift, but the man was insistent: “Wait, I need more details! Did the kiss happen mid-skate? How did this play out?”

I deflected all other questions with a toast: “To Drew!”

Indeed, let us all raise a glass to Drew. The sweet, gentle boy who taught me how to trust again.

The world could use more Drews. (And more Presbyterians, too.)

Stay tuned until next week, when we’ll cover more on our Synod School experience. Such as our birdwatching class, where we learned about geese and men in funny hats and how a stiff neck is never your friend.

26 thoughts on “Back in a dorm, chance meetings, and memories of my first kiss”