This week we continue the tale of our Iowa Synod School trip (click here for last week’s entry).

Quick recap for those too lazy to click the link: Two weeks ago, I and 639 other Presbyterians attended a Synod School in Storm Lake, Iowa. I took four classes, one of which was a birding class called “Robins, Raptors and Ducks.”

What follows is a lowdown on what I learned…

On the first day our teacher made a confession. “I am by no means an expert on birdwatching.”

She proved this in so many ways.

She may have been the most computer-illiterate person I’d ever met. Watching her try to navigate the various birding sites was downright adorable. We’d coach her as we watched her efforts on the classroom screen – “click on the tab… no, the big one on the right… click there… I think you need to go back one… just hit the logo… no, the one at the top…”

And when she’d accidentally log herself out (at least once every morning), she never remembered her sign-in so she’d open up her email. Still keeping the projection on the screen so we saw her user name (birdlady47) as well as her 352 unopened emails. (Her Amazon purchase recently shipped!)

No surprise, she was also terribly scattered. Several times she’d rifle through her notes – “Oh, I must have left it in my room” – or lose her train of thought – “Now where was I going with that?… oh well, couldn’t have been too important.”

But what she lacked in expertise or competence, she made up for in enthusiasm. Never have I seen a woman’s face light up with such joy as she discussed bird poop, or the ecstasy she experienced watching a mama bird upchuck into a baby bird’s mouth.

And here’s another thing I loved about her: she was as fond of commonplace birds as I was. Even speaking highly of crows and pigeons. “They’re quite intelligent, you know.” 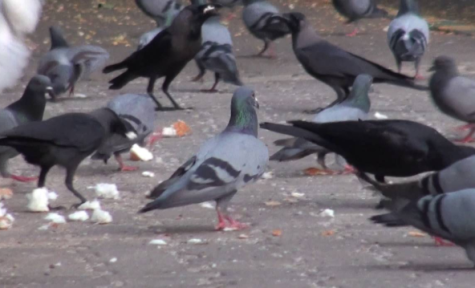 As I mentioned before, we were to spend two of our class times outdoors. What surprised us is that she scheduled the first one for Tuesday, only our second day in. Someone asked if we’d carpool. “I suppose we could…” she replied.

“Where should we meet?”

She thought about it. “How about over by those benches. You know the ones I mean?”

“You know… over by that building…,” she waved her arm vaguely. “I think it’s the science building. Or maybe it was arts.”

One of the male students – the one wearing a funny hat so presumably a world-class birder – was more precise. The next day we would meet at the benches nearest the visitor parking lot and drive to the park by the lake.

Sadly, the teacher was not real specific on which side of the park, so some of the class wound up across the lake. I was with the teacher’s group.

Here she is sitting on a bench. 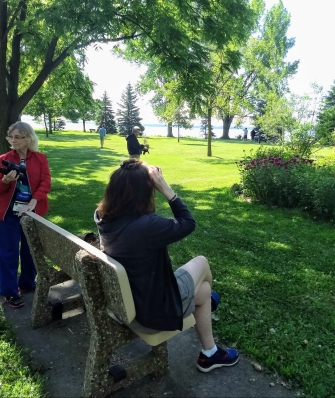 This is where she placed herself as soon as we arrived. She gave us no instructions, just plopped down with her binoculars.

We milled around wondering what to do. 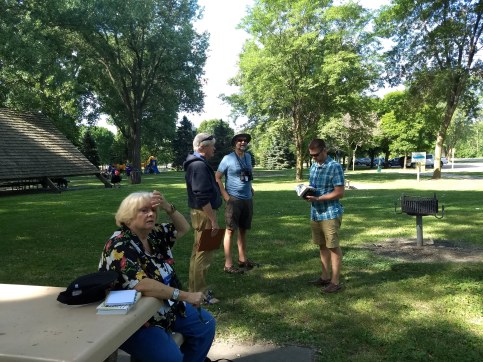 Eventually we figured it out. It’s a birdwatching class. We should watch birds.

Here are a few of my classmates catching sight of an I-don’t-know-what.

Frankly, I found my classmates more fascinating than the birds. Definitely easier to take pictures of; they moved around less.

Here’s Man in Funny Hat, but he forgot his hat.

He still looks kind of funny though.

This is Charlotte. Doesn’t she look sweet?

I met her during the ride to the park and fell in love with her. She’s an Iowan grandmother and I think by law they have to be sweet.

As for the birdwatching… you know, I gave it my best shot. Really I did. Had my binoculars out, gazed up into the trees. The whole shtick.

Then about 10 minutes in, give or take a few minutes, I felt a familiar twinge in my neck and thought, “Oh yeah – I have neck problems!”

Really, you wouldn’t think it’d be hard remembering two major surgeries, 12+ weeks of recovery, titanium plates and rods, all that jazz. But somehow I forget every time. Up until I feel the twinge, of course.

I spent the rest of the class period keeping my head level, which wasn’t too bad considering we were at a lake.

I saw some lovely Canada Geese.

I’m humbled to learn I’ve always called them by the wrong name. I used to say Canadian Geese, but apparently they lack citizenship status and so are simply Canada Geese.

Anyway, despite correcting my head position, I wound up with one humdinger of a stiff neck. For the rest of that day and half of the next, I had the most impressive posture you ever did see. (My God, I was in pain.)

Even so, I soldiered on. No one except Husband knew (poor guy, he hears all my woes). Though when the next outdoor birdwatching day was scheduled for Thursday, I bowed out, thinking it best not to chance it.

As it turned out, it was just as well. Not only was Thursday cold and rainy, half the class wound up at an entirely different location than the rest.

When Friday’s class began, our teacher apologized. “I decided yesterday morning we’d go to a meadow instead,” she explained.

“Yeah, I didn’t know how to send you a message,” she explained, no doubt having forgot her email password. “Then I figured, oh well, they’ll probably still see some nice birds where they’re going.”

Okay, so the birdwatching teacher was a bit of a birdbrain (and we’re not talking crow-level brain either). Even so, I did learn a few things:

So ends this week’s episode of Synod School for the Birds.

Stay tuned next week when we tackle the Letter from Birmingham Jail and how it will impact the Presbyterians… or will it?

29 thoughts on “Birding with birdbrains and a stiff neck”