For those of you new to this neck of the woods, we’re covering some classes we took at a “Synod School” first talked about here. In last week’s episode, we told you about our birdwatching class. This week we tackle the Letter from the Birmingham Jail.

Quite the change-up, don’t you think?

I warn you, this will be a longer post than usual, but have no fear! I’m including a TL:DR summary for those of you too busy for a five-minute read. (Just scroll down to the heading in orange to skip all the actual blood, sweat and tears that went into this post.)

Now, for those of you still with me… aww, I love you guys so much!

The class I took was called “The Letter from Birmingham Jail as Confessional Statement.” In short, we were discussing the recent overture that was made for the Presbyterian Church to include King’s letter into their Book of Confessions.

(Presbyterians are big on acronyms.)

Okay, glad that’s out of the way. Now let’s get this puppy underway with a quick history lesson.

Dr. King wrote the Letter from Birmingham Jail in response to another letter printed in the April 12, 1963 newspaper. That letter was signed by eight clergymen from various denominations and one rabbi, all of them white.

King had been arrested the morning of April 12 (this was on Good Friday) after a nonviolent protest, so someone smuggled in the newspaper for him. Not too pleased at what he read, he began writing his response to their letter in the margins of the newspaper. Eventually he was allowed some legal pads.

Here’s the letter from the eight clergymen: A Call for Unity. The link includes a little background on the men and you’ll note, these are not bad men. They agree change is needed, but that it should be “properly pursued” in courts. They continue:

We recognize the natural impatience of people who feel that their hopes are slow in being realized. But we are convinced that these demonstrations are unwise and untimely. (…) such actions as incite to hatred and violence, however technically
peaceful those actions may be, have not contributed to the resolution of our local problems.

In other words, “You need to stop doing your peaceful things because it’s making angry people do bad things.”

Of course, the clergymen weren’t the only ones concerned about the violence “incited” by the protests. Please note that while King’s response was finished relatively quickly, they could find no one to publish it until August. Even liberal publications were nervous about associating themselves with King.

Another thing you’ll notice if you bothered to read A Call for Unity: it signed by a Presbyterian.

Rev. Ramage was moderator of the Alabama Synod and according to the document I linked, was described as a “humble peacemaker.” In 1965 he was forced out of his pastorate by segregationists. Meaning they were not so keen with his peacemaking.

Fast forward to the present…

At the last General Assembly in 2018 (GA is the national meeting for Presbyterians and is held every other year), the Presbytery of the Twin Cities (right here in Minnesota!) made this overture:

On Adopting the “Letter from Birmingham City Jail,” written by the Rev. Dr. MLK Jr. as a Contemporary Statement of Faith (But not with Constitutional Standing)

Four people from the Twin Cities Presbytery were in my class (two of them were at the wine party). You’ll note their overture said, “not with Constitutional Standing.” This means they weren’t asking for it to be included in the Book of Confessions.

There are two slogans that get bandied about quite a bit by Presbyterians that are quite apt for our discussion. The first one is “Decently and in Order.”

Mostly it refers to their process of government, but somehow it just kind of describes them as a whole.

I truly believe that if there’s a roomful of people in complete chaos and you throw a Presbyterian in their midst, by the end of the afternoon a committee will have been formed and a resolution presented for the entire group to vote on and adopt.

Afterwards they’ll have a potluck dinner. 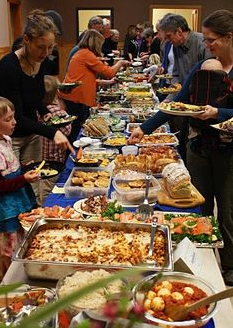 The second motto for Presbyterians is one I really, really love: “Reformed and always Reforming.”

Now you put these two mottos together and you wind up with a church that’s quite open to change, as long as they have a whole lotta time to think, discuss, study and reflect on it.

During one of our sessions, the instructor explained the constitutional process for the church. It was not unlike a civics lesson.

Following the GA vote, the next step is for a committee to study the matter carefully and make their recommendation at the next GA in 2020. If they say yes, definitely proceed, then the GA studies it for their next meeting in 2022, where the delegates (equal number of ministers & elders) will vote on it. If they vote “hell-yeah-let’s-do-this,” it goes to individual presbyteries for a vote. These individual presbyteries will give it to their churches for input beforehand (again, pastors and elders get equal vote). If 2/3 of the presbyteries agree with their own “hell-yeah,” it then goes to the 2024 GA for ratification.

If you’ve been keeping track, this is a six-year process at a minimum. Things can get delayed at any point. For instance, with regards to this overture, they are still in talks with King’s family on the copyright. So as of right now, there’s not even a committee in place for the initial study period.

You see how “Decently and in Order” comes into play?

Obviously it would be a whole lot faster if we had a top-down form of government. All we’d need is for the Big Man on Top (let’s face it, it’s usually a man) to say his thing and boom, there it is.

Alas, Presbyterians insist on everyone having a say. And that is why we have this ponderously slow process.

Yet, in spite of this, reform does happen and that shouldn’t be taken lightly.

Consider for example a couple of overtures that went to the same GA (I found them while hunting for the exact wording of the Birmingham overture):

Granted, I have no idea what the outcome was on these (they didn’t ask me), but I appreciate the fact they were on the docket and getting discussed.

And while I have no proof of it, I have an inkling that might have been the whole point of this Birmingham overture – getting the Letter out there and read.

Someone in the class had asked if it was really necessary to include King’s letter to our Confessions. “Can’t we just ask churches to read it and conduct studies around it?”

To that, one of the Twin City clergy replied, “Sure… but would they?”

And there’s the rub. By getting the Letter on track for Constitutional standing, they are forcing churches to pay attention to it. And if they read it – if people are honest with themselves – they should feel convicted by it.

(Just to be clear, though we in the pews are not reading the Book of Confessions, any clergy worth their salt would let us know about any changes or additions.)

We certainly had some dynamic discussion in our class regarding King’s words, let me tell you. Even though most believed it wasn’t really a Statement of Faith as our confessions are meant to be (and in truth, although it’s an incredibly important document, I have to agree with them), they felt an urgent need for action. To get off our comfy White Moderate couches and do something.

On the final day we had a time for open discussion. Two of the comments stayed with me, both of them made by male clergy:

You know, as I read King’s letter over and over, I felt so angered by my own inaction. But also frustrated because I didn’t know what to do and I kept thinking, I wish someone would tell me. And then it occurred to me – you know what? African Americans don’t owe me anything. Women in MeToo, they owe me nothing. My Native brothers and sisters, they don’t owe me a goddammed thing. This is on me. I have to educate myself. Learn the issues; figure out what to do. It’s on me. I can’t be forcing my (*airquotes*) white-mans-guilt on anyone.

And the other guy:

I’ve been thinking… I’ve had a pulpit now for nearly 27 years and never once have I used it. I’ve never really said what I thought. And you wanna know why? It’s because I don’t want to have that meeting on Monday night. Or the angry phone call Sunday afternoon. I mean, seriously, what am I afraid of? I’m a white Cis-Male, American citizen, well-educated and in my 40s. I’m secure. I’ve practically got a freakin’ capital P over me for crying out loud. I can always get another job. I don’t have the problems so many of my brothers and sisters in Christ have. And here I’ve got this pulpit and never use it! … so that’s what I decided I’m going to do. I’m going to start using it.

I wish I’d thought to get his name so we could all shower him with letters and cards.

Keep the faith, you big lug. You’re making us proud.

And so ends this really long episode of Synod School for the Wannabe Activist.

Stay tuned next week (or maybe the week after, kinda busy right now) when we’ll learn more about the Enneagram and Why We Are the Way We Are.

AKA: why this blogger has always made a lousy activist.