Got a treat for you today.

Husband was going through some old papers that his Grandpa gave him several years ago. It was mostly baseball articles his Grandma kept — she was a big Giants fan — and there among the Willie McCovey memorabilia, he found an old newspaper clipping from The Marietta, Ohio, Times. Using my best sleuthing skills, based on the dates mentioned in the article, I’m guessing it must have been written around 1959. 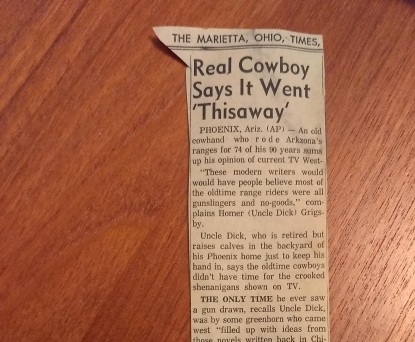 There’s some real charm to this piece. First off, Arizona is misspelled in the first sentence. You gotta love that.

(I’m thinking it was the editor’s day off.)

For another, the man who is the subject of the article – Uncle Dick – was a good friend and one-time colleague of Husband’s Grandpa. I don’t have a picture of Uncle Dick, but I have one of Grandpa. 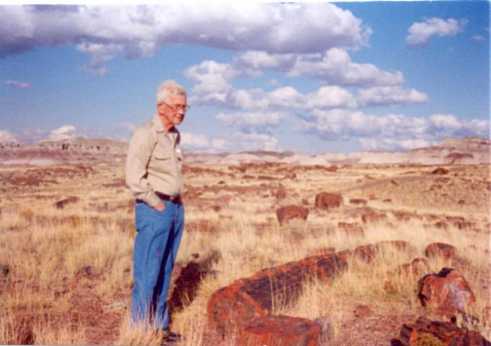 That log in front of him is petrified wood. (His land bordered the Petrified Forest in Arizona.)

Sometime I’ll tell you a little more about Grandpa. Just know he was one of the truly good ones, so I expect his friend was, too.

Husband said he has a hazy memory of Uncle Dick, and while being fully aware he wasn’t his uncle, nevertheless always called him Uncle Dick. As did everyone else.

I don’t know about you, but I have a special fondness for anyone who goes by Uncle or Aunt, but are neither an uncle nor aunt. It’s like, the second you meet them you just wanna give them a big ole’ hug.

Back to the article, much of what Uncle Dick says contradicts nearly everything we’re told of the Old West. I figure there are two possibilities at play here: either Uncle Dick is correct and the movies, novels and TV shows have exaggerated things all out of proportion, or Uncle Dick — being one of the good ones — stayed blissfully ignorant of any wrongdoing.

Third possibility: it’s a bit of both.

In any case, the article is a delight and so I’m sharing it with you. Misspellings and all.

PHOENIX, Ariz. (AP) — An old cowhand who rode Arkzona’s ranges for 74 of his 90 years sums up his opinion of current TV West –

“These modern writers would have people believe most of the oldtime range riders were all gunslingers and no-goods,” complains Homer (Uncle Dick) Grigsby.

Uncle Dick, who is retired but raises calves in the backyard of his Phoenix home just to keep his hand in, says the oldtime cowboys didn’t have time for the crooked shenanigans shown on TV.

The only time he ever saw a gun drawn, recalls Uncle Dick, was by some greenhorn who came west “filled up with ideas from those novels written back in Chicago.”

The only real reason most cowboys carried weapons, he adds, was for animals.

Uncle Dick was born on a wagon headed for Texas from Louisiana. He left his home in Dallas at 16 to become an expert cowpuncher on the Arizona-New Mexico range. That was in 1885, 27 years before Arizona became the 48th state.

In those days, cowboys went to work before daylight and quit after it was too dark to see. At the time, Uncle Dick worked with Arizona’s famed Hash Knife outfit.

Range Riders then worked in all kinds of weather. Uncle Dick recalls:

“Back in 1917 near the White Mountains, it got so cold that hooves froze and dropped right off cattle. It sure was a mess — we only saved 16 head out of a herd of almost 300.”

A tobacco chewer since he was 16, Uncle Dick makes one concession to the modern age. He carries a spittoon.

“On the range,” he adds, “you could just pucker up and let’er fly. But now I’ve got to be careful of these newfangled carpets.”

22 thoughts on “A tale of the Old West, from a for-reals old-time cowboy”