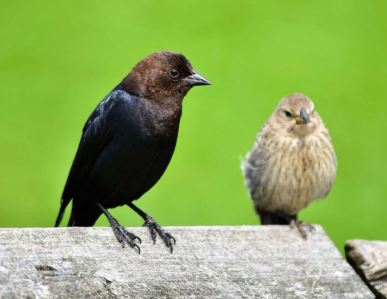 If you recall (here, here, and here) I’ve been delighting in all the various birds visiting my backyard feeders. And though I even took a class last summer (related here) I’m getting more information from my little field guide by Stan Tekiela, Birds of Minnesota.

Every state has their own version of this, in case you’re interested.

Oh, and about a month ago I saw a Peregrine Falcon perched oh-so-regally on an oak about 20 feet from where I sat in our sunroom. He surveyed the area for several minutes, then left empty-handed.

Which was just as well. I wasn’t up to seeing anything bloody at the time. But he was beautiful and I was thrilled he stopped by for a visit.

However a few days ago we had a most unwanted visitor. It was the first time I’d seen this bird and I hoped for all the world I was wrong, but Mr. Tekiela confirmed my suspicion.

A pair of brown-headed cowbirds has moved into the neighborhood.

I’m sure it’s just a matter of time before our property values decline.

I discovered they liked the new seed mixture I bought, so I hastily replaced it with nyjer seed. I seriously doubt my little feeder is what brought them in (they were probably here the whole time and I never noticed). But even so. No sense in encouraging them.

If you’re wondering what the big deal is, the cowbird is one of those birds. You know the type. The kind that can’t be bothered to build their own nest or take care of their own kids. Always expecting others to pay their way for them.

They’re what’s called a “brood parasite.” According to my man Stan, “Cowbirds are known to have laid their eggs in the nests of over 200 species of birds. While some birds reject cowbird eggs, most incubate them and raise the young, even to the exclusion of their own.”

If there was ever a bird in need of religion, it’s the cowbird. We need to put the fear of the Great Almighty Albatross in them. If they don’t straighten up their act and become decent members of bird society, Lord Albatross will cast them into bird hell forever.

Fortunately some birds have wised up to the cowbird’s ways and take appropriate action.

Case in point, this Robin:

Also, some warblers have caught on to their act and not only warn fellow warblers, but possibly other birds as well.

Here’s a video from a PhD student at the University of Illinois on the subject:

I don’t know about you, but it thrills me there are people in the world studying these kinds of things.

No matter what crap might be going on in our lives, we can take comfort that somewhere there’s a grad student getting dive-bombed by a red-winged blackbird just so she can write her research paper.

God, I love that!

Speaking of research, I read an article about cowbirds that points out the difference between a real scientist and someone who’s just dissing cowbirds on her blog.

Instead of being outraged by their behavior, scientists pondered a serious question: How does a cowbird know it’s a cowbird?

Think about it: if a cowbird is raised by a finch, what keeps it from thinking it’s a finch?

So the scientists did an experiment, because that’s what scientists do. They observed the birds in captivity and guess what? In captivity, the cowbird thinks it’s a finch!

It even tried to mate with a finch, which must have been quite confusing for the poor finch. 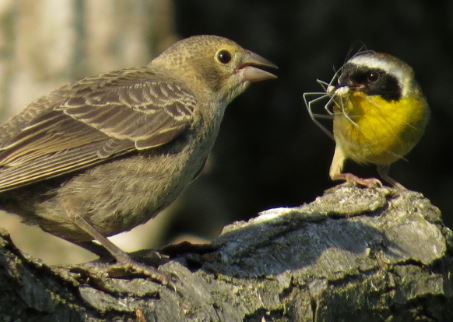 Anyway, once that was determined, they had to find out what was happening in the wild.

As it turns out, while the female cowbird is indeed putting her children into foster care, she does not completely abandon them.

First off, she keeps an eye on the nest to make sure her egg has been accepted by the other bird. If it hasn’t, she makes a note not to leave it with that bird again.

Also, there is apparently some communication given to the little fledgling, who develops much faster than any of the host’s young.

At some point – around the time they’d be a young teenager – they get word to fly out of the nest and go to an open field where other cowbirds have gathered. Once there, it is presumed they are indoctrinated with cowbird philosophy.

In a nutshell: Let others do the work, son. It’s the cowbird way.

Also, isn’t it amazing how much work goes into the process of getting out of work?

I mean, come on, just build a damn nest already!

Now if you’re anything like me, you’re probably wondering if there’s something we can do about cowbirds.

The short answer is: No.

From everything I’ve read, whatever harm they are doing to the songbird population pales in comparison to what humans are doing to their habitat. And that’s something we can control. (Also, keep your cat indoors.)

Another thing, should you find a cowbird egg in a nest, leave it there. This article explains why.

The article makes a good point of not forcing our human morality on nature, however much it may offend us. This is how Sarah Winnicki, an avian ecologist at Kansas State University, put it:

I try to convince people about how amazing [cowbirds’] evolutionary story is. How did they learn to find nests, to lay eggs, and to re-find them later? How do they learn to time their reproduction to their hosts? As an ornithologist, this is incredible to me.

Which is all quite true, but I’m still not going to encourage them by providing food.

Before I go, I’m leaving you with one more video. This is a birdbath in the Bay area and very relaxing to view. It’s about eight minutes long and begins and ends with a squirrel, but in between time the birds are having fun:

Hmm… maybe I should get a birdbath?

17 thoughts on “There goes the neighborhood: Undesirables at the bird feeder”