If you don’t want to read anything political, you may want to click away and read something else. I suggest this.

For those of you still with me, unless you live under a rock you likely know we’re dealing with an election year here in the U.S. And you’re also no doubt aware that it is a heated one, with many strong opinions on both sides.

In our small neighborhood alone, there about a dozen homes with political signs, some with multiple signs covering all directions. (Neighbor Buddy has three.)

For those interested, the overwhelming majority are for Biden (including Neighbor Buddy’s), though this county voted Trump in ’16 (decidedly so). Whether this is a portend of things to come, I can’t say.

As for our house, we have never posted political signs. Ever.

Our usual defense for this is that Husband is a minister and to this, people always nod their heads and say, “Oh, I understand completely.”

Except there’s nothing actually preventing us from posting political signs. There’s no rule against it, no tax penalties leveled, and of course, certain Christians have never made a secret as to where they pledge their allegiance.

Until this year, that is. After years of silence, we realized silence was no longer an option.

Here’s the thing: Long ago when I stated I had “no ilk,” what I meant was that I don’t put my trust in worldly matters. I do vote. I care about what happens and attempt to keep up with the issues. But in the end, my faith lies elsewhere. (And given Husband is a minister, I’m going to assume you get my meaning.)

It was about a month ago when we began talking about posting something in our yard. This was back when there were only four signs total, and two of them were for Trump.

The Trump signs were the first to appear. One was a big flag right underneath the guy’s American flag. The other was a sign that included the line, “God, Guns and Country” (making me want to ask what version of the Bible he had, because it sure as hell wasn’t one I’d ever read).

After giving the matter a lot of thought, I placed an order for a sign that we could stand behind. The best thing about it was that all proceeds from the sale benefited a women’s health organization. (Score!)

Sadly, it wasn’t expected to arrive for two weeks. (Augh!)

True fact: I’m one of those people who, once I get an idea in my head, can’t rest until the thing is done.

And that’s when it came to me. The perfect sign for our yard.

I found a piece of wood, painted some letters and slapped on several coats of polyurethane for weather protection.

Once dry, I set it up by an old stump: 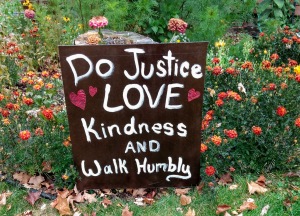 Some of you might recognize the words. They’re based on Micah 6:8:

He has told you, O mortal, what is good;
and what does the Lord require of you
but to do justice, and to love kindness,
and to walk humbly with your God?

If there were ever words that I would state as my “dogma,” they are these. Terribly simple, yet terribly challenging to live by.

Oddly enough, as I was putting the sign in the ground the other sign was delivered — 10 days ahead of time! 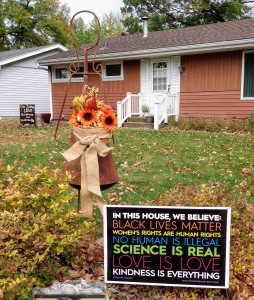 Before I went back into the house, three neighbors stopped by to tell me how much they liked my signs. One said, tapping her chest, “they’re good for the soul.”

Of course, I know that won’t be everyone’s reaction and some might say it’s better not to risk offending anyone.

On the other hand…

Here’s a secret: that original link I provided at the top for people who didn’t want to read anything political? It leads to a Vox article titled “Why don’t Americans talk about politics?”

Its main conclusion is that we’d pretty much do anything, even avoid seeing loved ones, if it means avoiding conflict. And while it doesn’t offer clear solutions, the article points out that this unwillingness to discuss opposing viewpoints has led to an inability to have any sort of civil discussion. As a result, this has led to more polarizing viewpoints on both sides, to the point that now the differences we are seeing has less to do with ideologies than tribalism.

That, my friends, is deeply troubling.

The only way out, as I see it, is to be willing to have difficult conversations with people who don’t agree with us. To not view the other side as stupid, morally bankrupt, or losers. To speak from a place of respect and not sarcasm.

And to be willing to use your blog, typically devoted to bad jokes and questionable humor, to state once and for all your ilk.

Peace out, my friends. 🕊️