Hey, gang! As Halloween is a mere hop, skip and a shriek away, we have a deadly treat for you today. Complete with soundtrack, should you be so inclined!

And as I’m eager to get back to carving the pumpkin, let’s hop right into this week’s edition of a terrifying…

If this is the first time you’ve tuned into the BJM festivities, these are the proceedings in a nutshell: People leave jokes, I draw/create graphics, laughter (in an ideal world) is the result. Rarely do people die, though as this is our Halloween edition, all bets are off.

Last week, per request, all the jokes left in the comments had a spooky aura about them. (Thanks, guys!)

Right out of the gate,  Moonstone Mary combined her love of music, heaven & humor with this number:

What goes on when a ghostly church musician and a surgeon specter hang out in the great beyond?
They just chill and talk about organs.

Pretty great, right? And one that would have received an illustration, should the illustrator in charge (me) been more talented and/or creative. (Once I drew a piano for one of these jokes. I’m still in recovery.)

Then I remembered a cool video with organ music and thought, hey, we could use some ambiance to gussy up the place! (All you need do is set the video to play and continue reading)

Or if you’re anything like me, you’ll find yourself mesmerized by the little dancing lights and will watch it the whole time. Whatever. You do you, friend.

Now that we have the perfect soundtrack to guide us, let’s hear from Lynette of In the Net!  who set a truly dark tone with this one:

Next up, join me as we welcome Brian of Bonnywood, who delighted the crowd with his FIRST-TIME entry!

News flash from the Buford County Gazette: The town council was forced to shut down the Annual Wee Urchin Pumpkin Pickin festivities earlier this evening when one of said urchins encountered something she didn’t expect to find. Little Stormy Danielle told this reporter: “I turned the corner and there was Donald Trump. I didn’t notice him at first because he looked like all the other pumpkins, but then I realized he wasn’t wearing a mask…”

For his first entry into the BJM canon, I’d say Brian did pretty darn well, don’t you?

I so wish I could draw something worthy of it, yet drawing real live people isn’t my thing. (I should take a class in drawing caricatures. That’s where the real money is.)

Back to Brian’s joke, I dearly hope he isn’t too bothered I did a graphic instead… 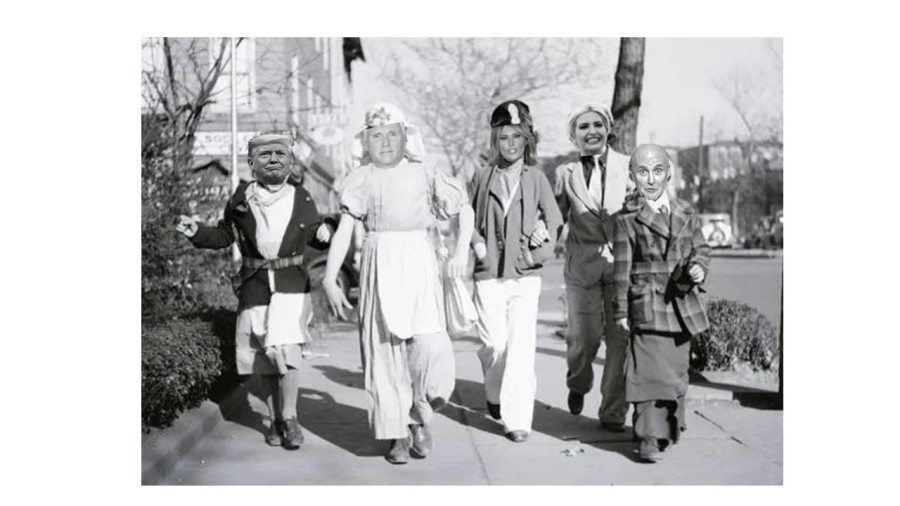 I also hope it doesn’t give him nightmares.

Side note to Brian, the original photograph might make a swell post for you, should you feel so inclined. Here it is:

What do you call a witch who lives on the beach?
A sand-witch!

What do you call witches who live together?
Broommates!

The reason WD gave us two is that he felt bad he missed the previous week. Isn’t that sweet?! (I hope you’re all paying attention to this. If you want a star on your joke submission, better follow his lead.)

Next up, Andrew of Andrew’s View of the Week led us down a creepy path:

You know that ghosts say, “boo!” a lot.
Did you also know that “boo” is Latin for “I’m screaming”?
Why do ghosts speak Latin?
Well it’s a dead language … 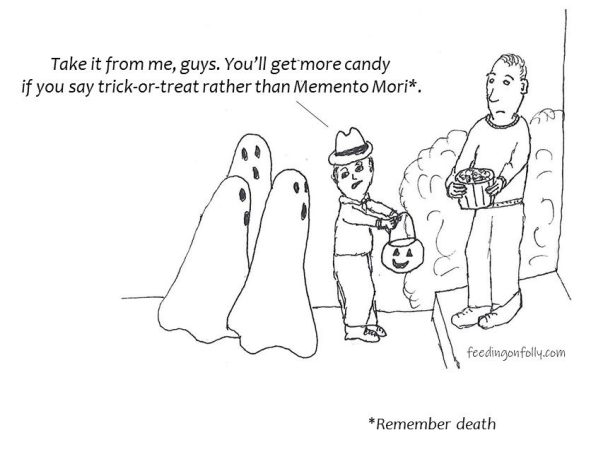 I think what I’m most proud of in this drawing is the taller of the ghosts. She has such a mournful, soulless quality to her. Also, the way the kid is speaking out of the corner of his mouth? Nailed it!

Riding in dead last, Eilene from Myricopia did not disappoint. Her joke was truly terrifying, in a most environmentally responsible way:

The EPA is urging people to boycott plastic skeletons this year.
Locally-sourced organic ones are much more environmentally friendly.

And there we have it, friends. Another edition of Bad Joke Monday goes to the grave.

Now it’s time for you to leave a joke in the comments for next week’s post. (But first, if you scroll back up to the video, you can watch the dancing lights as they finish the fugue!)

Until next week, keep smiling friends! 👻

Featured image by NeONBRAND on Unsplash